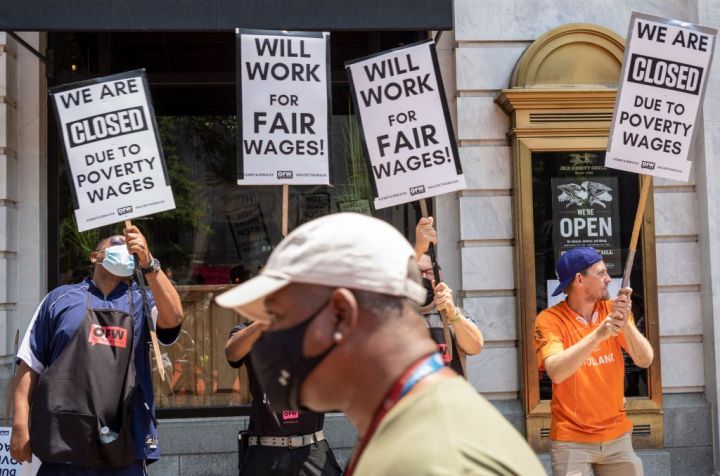 COPY
Activists take part in a protest outside of the Old Ebbitt Grill to call for a full minimum wage with tips for restaurant workers in Washington, D.C. on May 26, 2021. MANDEL NGAN/AFP via Getty Images

Activists take part in a protest outside of the Old Ebbitt Grill to call for a full minimum wage with tips for restaurant workers in Washington, D.C. on May 26, 2021. MANDEL NGAN/AFP via Getty Images
Listen Now

We’ve gotten the monthly jobs report — for August — this morning. Employers added nearly 2 million jobs in the previous two months, and a big question looms as to whether that recent strength will be sustained as the economy continues to reopen.

One thing that seems likely to continue is strong wage growth. Average hourly earnings were up 4% year-to-year in July, and nearly as much in June — much higher than was typical in the years between the Great Recession and the pandemic.

As service businesses have rushed to reopen in recent months, they’ve been offering signing-bonuses and higher starting-pay to get staffed up.

“Particularly among workers in low-wage sectors that had lost the most jobs early in the pandemic—hospitality and leisure, and then particularly restaurant workers,” she said.

And economist Jay Shambaugh at George Washington University said many low-wage service workers don’t want to go back to their old jobs, at their old pre-pandemic wages.

“They don’t feel quite as desperate that they’re just going to take anything they can get. And they’re looking for a better job at a better wage,” he said.

“You know, maybe you used to work for $8-or-$9-an-hour in a restaurant, but now there’s an Amazon warehouse nearby where you can make $18,” he said.

The pandemic has also thrown workers a curve ball: for now, sharply rising prices are eating away at the higher wages workers are earning.