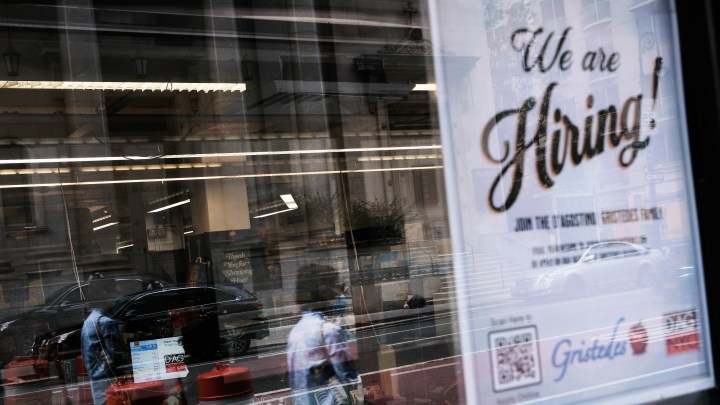 COPY
Many companies in retail and the service industry are boosting wages to attract workers amid the labor shortage. Spencer Platt via Getty Images

Many companies in retail and the service industry are boosting wages to attract workers amid the labor shortage. Spencer Platt via Getty Images
Listen Now

Last month, hourly wages ticked up again for the sixth-straight month in a row. That’s still a reflection of ongoing labor shortages as companies try to lure new hires with increased pay and incentives.

The September wage numbers from the Labor Department are good news in particular for workers at restaurants, hotels and retail.

The average wage for leisure and hospitality workers was nearly $19 an hour in September. To the penny, it’s $1.85 more than last year. That’s a good sign, said Andrew Stettner at The Century Foundation.

“These have been the jobs with the lowest pay, the fewest benefits, the least reliable schedules in our economy,” he said, adding that workers can now demand more even from employers like McDonald’s and Walmart.

“Those employers are having to step up their game if they want to attract workers,” Stettner said.

In Portland Oregon, Angel Torassa works the front desk at McMenamins’ Crystal Hotel. She got a $2 hourly raise a couple months ago when she moved into that job.

“I was absolutely thrilled because it was just like, ‘Oh, my gosh, I can maybe, like, afford to eat now!'” she said.

Before, she visited food banks for groceries and was a couple of months behind on her electric bill — so the raise is a help.

“[It] definitely allows me to like catch up on my bills and whatnot,” Torassa said.

But can that kind of a raise keep pace with the rising cost of gas and groceries? Inflation can cancel out bigger paychecks, said Laura Veldkamp, a professor of finance at Columbia Business School.

“These workers who are getting higher wages now may be getting more dollars, but they won’t be able to buy more with it,” she said.

It’s not yet clear whether these elevated wages are here to stay, according to Veldkamp. That depends on whether all the workers who left the labor force during the pandemic decide to jump back in.