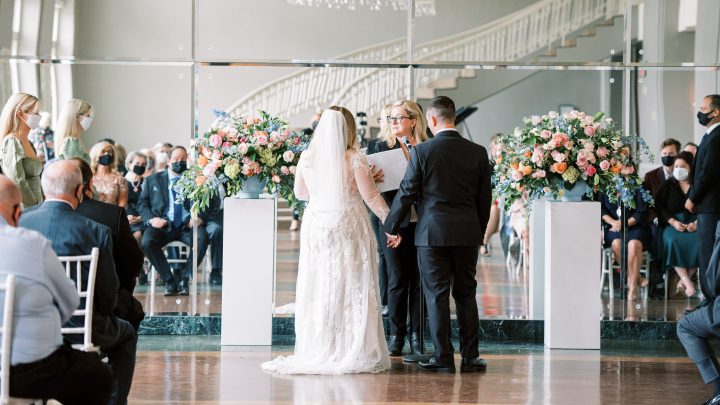 COPY
Wedding planning is booming as analysts forecast the highest number of weddings in over a decade for 2022, according to market research firm The Wedding Report. Photo courtesy Amanda Nippoldt Photography
My Economy

Wedding planning is booming as analysts forecast the highest number of weddings in over a decade for 2022, according to market research firm The Wedding Report. Photo courtesy Amanda Nippoldt Photography
Listen Now

Weddings are on the rebound as couples look to tie the knot after over a year of postponing their ceremonies during the pandemic.

Analysts are forecasting 2.47 million weddings for 2022, the highest in over a decade, according to market research firm The Wedding Report. The average amount spent on each wedding is forecasted to reach $24,300 in 2022.

Gretchen Culver is owner and creative director of Rocket Science Events in Minneapolis, where she typically plans larger events, including weddings.

In March 2020, Culver said her business began slowing down with the nationwide lockdowns and . She started looking into the smaller wedding market and launched her company Minne Weddings.

“I started exploring the small wedding format known as a microwedding with typically 30 or fewer guests,” Culver said. “We launched in April of 2020 as an opportunity for couples to still get married, even though they couldn’t have a big, traditional wedding.”

Culver thought the business could be profitable in the long term, and as pandemic restrictions began lifting, couples interested in smaller weddings continued to reach out.

“I was pleasantly surprised that I started getting emails from couples saying, ‘This is the kind of wedding I’ve always wanted to have,’ or ‘I’m an introvert, I don’t want to have a big wedding,’ or ‘I want a reason to not invite my crazy aunts and uncles,’ and so I pretty quickly understood that we would be Plan A for a lot of couples who wanted a small wedding,” she said.

Couples with a smaller budget are especially interested in the microwedding format, Culver said. Due to the smaller size and shorter ceremony, Culver said she’s able to book four or five couples back to back in the same day, allowing them to split the cost of all the amenities.

“Our couples are able to have better decor with high-quality vendors than they would if they were to do it on their own paying for them individually,” Culver said. “And because everything is designed, everything is included, that it makes it really easy for them as well.”

Culver said since launching Minne Weddings, bookings have been selling out, and she’s continuing to see demand for the coming years.

“Our dates for 2021 are almost all completely sold out, and we have a long waitlist of people who are interested in fall of 2022,” Culver said. “So we’re going to be releasing those dates fairly soon, and then, you know, don’t plan to stop anytime soon.”