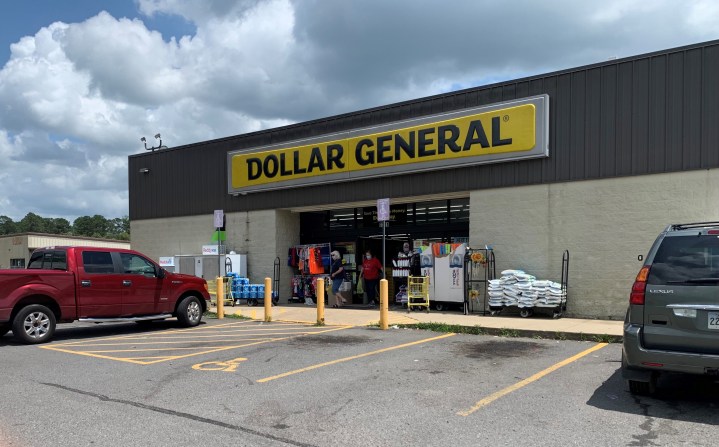 COPY
Dollar General plans to provide a "comprehensive network" of affordable health services. Residents have a hard time getting medical care in some of the towns where it has stores. Blake Farmer/WPLN News

Dollar General plans to provide a "comprehensive network" of affordable health services. Residents have a hard time getting medical care in some of the towns where it has stores. Blake Farmer/WPLN News
Listen Now

One of the discount chains with the most stores across the U.S. says it’s making a move into health care. Dollar General’s scale — it has more than 17,000 stores, many of which are in rural communities — could play a role in regions where health care has become hard to come by.

By the numbers, people who live in rural communities tend to need more health care than most. Many, like Gertrude Caruso and her husband, Rob, suffer with chronic ailments.

“I have ulcerative colitis, and he’s diabetic,” Gertrude Caruso said. The two retirees live in a town of 1,200 on Tennessee’s Buffalo River called Linden.

Linden is one of many rural communities that has lost its hospital in recent years. That makes it harder for local doctors to stay in business, though the need for primary care remains. The Carusos are also still trying to get help for lingering symptoms from COVID.

“You’ll always have effects from it,” she said, sitting in the parking lot of the only clinic in town. “You can’t get rid of that.”

Like lots of small towns, Linden does have a Dollar General.

The company, based outside Nashville, Tennessee, hired Dr. Albert Wu to oversee the creation of a “comprehensive network of affordable services,” according to a press release. He previously worked with McKinsey & Co. in turning around small hospitals.

Dollar General did not make anyone available for an interview about the company’s health care ambitions. The project follows moves by industry behemoth Walmart, which is starting to put primary care “supercenters” in many stores.

“Foot traffic is the name of the game — getting people off the couch, getting them away from their computers and getting them into the stores,” said retail analyst James Gardner, who has been watching Walmart closely. “And there’s few things as effective as health care because it has to be delivered hands-on.”

A Dollar General analyst at Morgan Stanley said the move into health care should boost profits because customers will come back more often and are likely to throw more items into their shopping carts.

Advocates for rural health care are watching these retailers’ actions.

“They are in most rural communities, so from that standpoint it makes sense. And I think that health care needs some creative and innovative partners to help bring access to it,” said Jacy Warrell of the Rural Health Association of Tennessee. “But I have some reservations.”

If Dollar General is primarily interested in profits, she said, it may do little to improve the health of rural America and could end up hurting the few existing clinics that need all the business they can get.