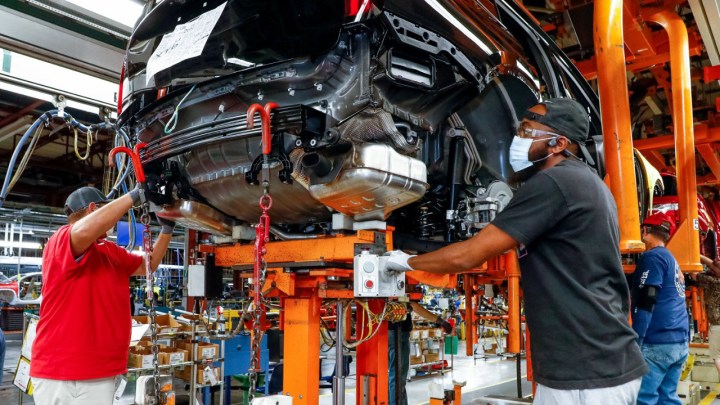 COPY
General Motors’ Spring Hill, Tennessee site, along with most car plants, is continuing to require masks for employees building cars as many plants struggle to reach a level of herd immunity. Courtesy of GM
Back to Business

General Motors’ Spring Hill, Tennessee site, along with most car plants, is continuing to require masks for employees building cars as many plants struggle to reach a level of herd immunity. Courtesy of GM
Listen Now

The local health department twice sent a team to vaccinate workers at General Motors’ sprawling plant in Spring Hill, Tennessee. Hundreds of workers are still unvaccinated, however, and the plant manager said it’s unlikely they’ll be coming back as a result.

According to a survey by plant manager Jeff Lamarche, fewer than half of the plant’s workers have been immunized against COVID-19. Lamarche said he doesn’t feel good asking busy public health nurses to return just to wait around for any stragglers.

“They weren’t wanting to do it for onesy, twosies,” he said. “They were looking for a bigger event.”

Lamarche said he hoped that the promise of being able to stop wearing masks in a hot car plant would be enough. So far, it hasn’t been. In fact, as plants struggle to convince enough employees to get the shot, the United Auto Workers decided in early June to keep most of the COVID-19 protocols in place.

Auto plants across the South are hitting a wall with COVID vaccination rates among their workers. They’re located in states where shots lag behind the rest of the nation, and the same is true inside their plants. Heightened demand for cars has their assembly lines running full tilt. Managers are eager to prevent any COVID-related downtime, but are unsure how hard they can push.

“The further you push it, you’re just not getting any more response rate. It’s maxed out,” Lamarche said. “What do you do? You move on and say, ‘OK, folks, we’re all responsible adults.’”

GM has resisted turning to financial incentives. Lamarche said if workers really need convincing, he’d rather just require the shot — though, he added, that’s not on the table at this point.

Seeing that workers might need some coaxing, Toyota has been offering workers a $100 bonus from the beginning, said Emily Lauder, who leads the COVID-19 response effort for Toyota’s American plants. Employees just have to send in a picture of their vaccination card. “That’s how we’re tracking the percentages of folks that are vaccinated site by site,” Lauder said.

Vaccination rates for the company range from around 30% at the high end to less than 15% where Lauder is based, at Toyota’s Mississippi plant, she said.

The company’s rate of vaccination in Kentucky is higher than in Mississippi, for instance, she said, mirroring the state vaccination trend in the overall population.

With car sales humming, it’s not a question of whether the company could afford to up the ante. Toyota has seen sales surge by about 80% this year. The automaker has contemplated starting a sweepstakes and giving holdouts a chance to win a car.

But Lauder is torn. “Some of the other incentives we’ve considered, we’re still struggling to figure out how far to go,” she said.

There’s employee morale to consider — a big consideration at a car plant with thousands of workers, said Robert Burns, who manages human resources for Hyundai’s plant in Montgomery, Alabama.

“Go and offer an incentive to someone who has not [received a shot] and then the people who already got it say, ‘Well, what about me?’” he said.

While Hyundai hasn’t sweetened the pot with bonuses or car giveaways, it has tried to make the shots easy to get in a partnership with a local health system. The only real perk is the hope of being able to sit together at lunch again, no more prepackaged food in the cafeteria.

“There’s things we do that we’d like to get back to some degree of normal, and that’s the rationale for it,” Burns said.

It’s working for Hyundai, with more than half of employees immunized, Burns said. He said the plant had just one positive COVID case in the month of May. But it hasn’t yet reached the herd immunity Hyundai wants. There are no plans yet for workers to take off their masks on the production line.