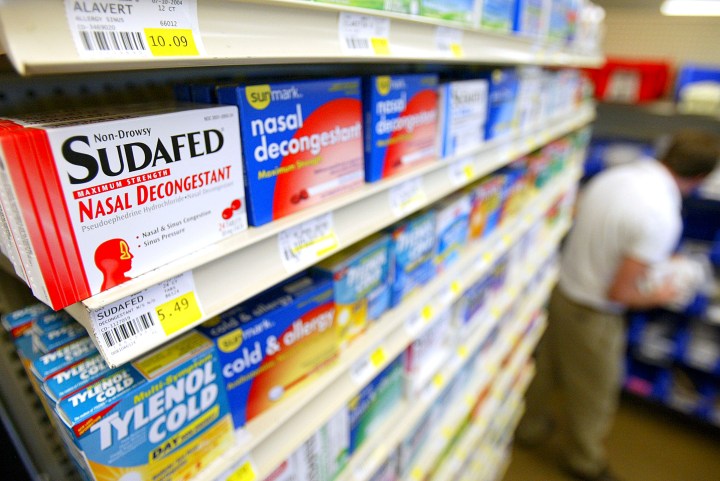 Cold, flu and cough medicine sales dropped by more than 27% over the past year. Craig Mitchelldyer/Getty Images
COVID-19

Cold, flu and cough medicine sales dropped by more than 27% over the past year. Craig Mitchelldyer/Getty Images

This is less an “always wondered” than a “keep wondering about lately”: with people social distancing to limit the spread of COVID, have we also limited the spread of common viruses, and has that reduced sales of things like decongestants and cough syrups?

The short answer is: yes. As people wore masks and applied hand sanitizer, and kids stopped going to school, we ended up curbing viruses like the flu.

Cold, flu and cough medicine sales in the U.S. plummeted more than 27% at the end of February 2021 vs. the same period last year, according to data provided by Nielsen.

There were also declines for sinus medicines, which dropped by about 23%, and upper respiratory combination packs, which fell more than 18%.

The total category of upper respiratory medicines — which include all the above categories — declined by roughly 14% and raked in about $8.1 billion in sales over the past year.

Compare that to the previous year, when many of these categories increased in sales. Respiratory aids increased by roughly 19%, while cold and flu medicines increased by about 9%.

In total, upper respiratory medicines increased by 6% and posted about $9.4 billion in sales.

Andrea Wroble, a health & wellness analyst at the market research firm Mintel, said that lockdown measures to control the spread of COVID-19 and better hygiene have halted the spread of seasonal ailments, which has decreased our reliance on over-the-counter medicines.

“Typically communicable illnesses are widespread and contagious, which really positions symptom relief remedies as health necessities,” Wroble said, adding that’s why the market had been so consistent over the past decade.

“That is minuscule compared to a normal flu season,” said Elizabeth Scott, an associate dean and professor of biology at Simmons University in Boston.

Scott said one of the most significant reasons for the flu’s decline is that young children — who are major drivers of its spread — haven’t been going to school.

“There are a number of experts out there who are saying it’s the fact that children are not getting infected and they’re not bringing the flu virus home to the elders in their household,” said Scott,  who is also the co-director and founder of the Simmons Center for Hygiene and Health in Home and Community.

Most experts think that flu viruses are spread through tiny droplets when people cough, sneeze or talk, according to the CDC. It’s less common for people to get the flu by touching a surface that has the flu virus on it.

But when it comes to colds, Scott said that the way we typically spread the virus is that we get it onto our hands and then touch our faces. She noted there are studies showing that cold viruses can survive 12 to 24 hours or more on surfaces.

Wroble said that Mintel found that in 2020, 49% of consumers said they experienced a cold in the past 12 months. This year, that figure is down to 30%.

Scott said we’ve been better about practicing hand and surface hygiene, wearing masks (which can inhibit you from touching your face) and we haven’t been out and about as much — all factors that she thinks have helped reduce the spread of common colds.

Tim Chiang, a senior research analyst for Northland Capital Markets, said that the largest manufacturer of over-the-counter medicines in the U.S. is Perrigo, which makes the storebrand medicines you see at Walmart or Walgreens. In the fourth quarter of 2020, net sales for the company decreased by 2.5% because of low levels of the cold and flu.

And Procter & Gamble, which owns Vicks, said it had a decline in sales of respiratory products in the second quarter of 2021, which was “driven by a lower than average incidence of cough, cold and flu this season.”

However, Chiang said that companies that sell over-the-counter medicines are pretty well-diversified.

“They sell hundreds of products. So they usually are able to still generate growth,” he said. “Their customers are gigantic — like Walmart. It’s big companies dealing with big customers.”

Chiang also pointed out that the company Reckitt Benckiser is the parent company of the cold and flu medicine Mucinex and Lysol, which saw increased demand during the pandemic.

Mintel’s Andrea Wroble said that despite the decline in over-the-counter medications, the crisis has “opened the door for a new segment in the illness management market.” That includes products like hand sanitizers, face masks, immune system support supplements and antibacterial cleaners.

“But on the flip side, brands have to consider that consumers are actually experiencing fatigue from constant concern about their health, safety and exposure to illness,” she added.

While the flu decreased this past year, we still have to be vigilant for the upcoming season — especially as the economy reopens.

Scott of Simmons University said that to get a sense of how flu season might look each year, experts look to the opposite hemisphere.

“That’s actually how they make the appropriate flu vaccine every year,” she said.

Which means that as the southern hemisphere gears up to enter winter, they may be able to predict how the flu season might look in the U.S. later this year.

“But there’s absolutely no doubt that people should continue to take their annual flu shot,” Scott added.

COVID-19I've Always Wondered ...
Tags in this Story
Share this Story