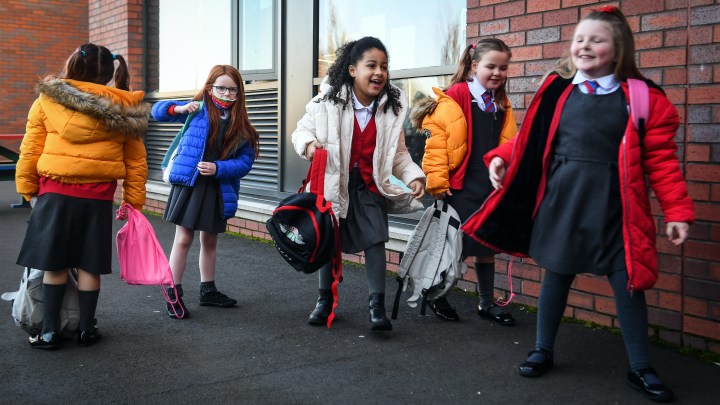 COPY
Most English children will return to their classrooms Monday. Many are eager to leave the house and see their friends again. Andy Buchanan/AFP via Getty Images
COVID-19

Most English children will return to their classrooms Monday. Many are eager to leave the house and see their friends again. Andy Buchanan/AFP via Getty Images
Listen Now

Monday there’s a milestone in the U.K.’s battle against COVID-19. Most of the school kids in England (the biggest nation within the U.K.) will return to school. They’ll be joining the minority of children who’ve stayed at their desks throughout the pandemic because they are considered vulnerable or their parents are key workers.

As millions of pupils — elementary and secondary — have been preparing to reenter the schoolroom, Marketplace has been talking to a couple of doting but frazzled parents who’ve been cooped up with their kids for weeks on end, trying to work from home, run their households and supervise their children’s educations at the same time.

In her small apartment, single parent Bryan has been looking after her two kids, Hugo, 7, and Georgia, 10, while working from home full time as a sales manager.

“It isn’t so easy when you’re trying to answer your work phone and the emails are going off. If there’s a phone call, I have to go and hide in my bedroom to take it there,” she said.

After their online lessons, the kids can get a bit lively, and Zoom meetings with important clients call for special parental measures.

“I’ve had to bribe the children with sweets, with movies, with popcorn …anything to give Mum 45 minutes of peace,” Bryan admitted. Meanwhile, a pair of noise-canceling headphones help her to concentrate on paperwork.

Bryan’s relief is shared by Roger Mortimer and his wife, who have two sons, ages 6 and 9.

Mortimer runs a small investment-marketing firm and has been working from home with his wife, who’s in publishing. Home schooling, he admitted, has been a struggle.

Parents and their kids have been under huge pressure, said Laura McInerney, who runs a daily online opinion survey gathering and analyzing the views of 2,500 parents and 9,000 teachers across the U.K.

“We found around 40% of parents said that their child had cried with frustration at home learning, but 22% of the families had both the children and the adults crying!” McInerney said.

“Forty percent of parents have told us that they didn’t feel they could handle the home schooling on top of everything else. It was just too much for them,” she said.

This does not mean that every parent feels unalloyed delight at the prospect of their children returning to school.

Mortimer’s sense of relief is tinged with anxiety.

“One of the teachers at the school died over Christmas from COVID, so there is a wariness about going back and we know there are significant risks involved,” he said. “We’re a little bit concerned that the teachers haven’t all been vaccinated as yet.”

The government is trying to allay those concerns and ensure that the return to school does not fuel a big upsurge in infections.

In a huge, logistically challenging program, pupils are scheduled to be tested for the virus three times in the first week after returning, and all secondary students and teaching staff will have to wear face masks if they can’t social distance in the classroom. However, not all teachers are reassured.

“About 60% of them, according to our soundings, feel unsafe going into schools,” McInerney said. “But the majority still want to return. That’s the job they signed up to do. They love being with young people. And they want to help them learn and grow in school every day,” she said.

And what about the young people themselves? How eager are they to head back to the classroom?

“I’m very excited to see my friends again,” 10-year-old Georgia Bryan told Marketplace. “I really miss being at school because I miss my friends. I’m not fussed about the schoolwork. It’s boring, anyway!”

Her mum, Cathryne, is understandably more concerned about the schoolwork and the disruption in her children’s educations.

“I’m petrified that they may have fallen behind. I am. More so for my daughter, who’s going across to secondary school. She’s lost out on two years potentially, academically. And I’m absolutely petrified,” she said.

The government is plowing more than $1 billion into a “catch up” fund to help repair the educational damage across the country.

Despite the anxieties and concerns surrounding the return, Monday’s event should raise the nation’s morale. Seven-year-old Hugo Bryan cannot wait.

The reopening of all schools is the first step in the easing of the lockdown, the beginning of the end of the COVID-19 hibernation. 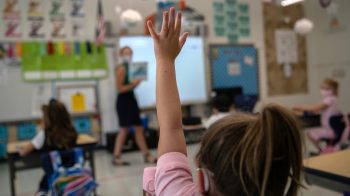