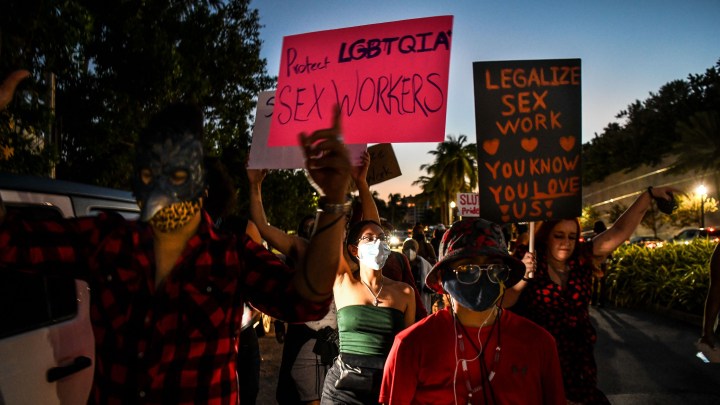 COPY
"Sex work was among a kind of array of jobs that are incredibly vulnerable and precarious, like in the gig economy where you’re not protected," said Mireille Miller-Young, a feminist studies professor at the University of California, Santa Barbara. Pictured: Activists and sex workers participate in a protest in Miami Beach, Florida. Chandan Khanna/AFP via Getty Images
COVID-19

"Sex work was among a kind of array of jobs that are incredibly vulnerable and precarious, like in the gig economy where you’re not protected," said Mireille Miller-Young, a feminist studies professor at the University of California, Santa Barbara. Pictured: Activists and sex workers participate in a protest in Miami Beach, Florida. Chandan Khanna/AFP via Getty Images
Listen Now

Wednesday was International Sex Workers’ Rights Day. A group of scientists who research sex work marked the occasion by asking the Biden administration to decriminalize it as part of its criminal justice reform.

In part, they’re calling to repeal laws passed during the Trump administration, especially regarding online sex work, a part of the industry that’s been transformed by the pandemic.

By its very nature, most sex work doesn’t involve social distancing. It didn’t for Sinnamon Love. (That’s her professional name.)

“I could not work,” Love said. “Because we had to lock down, the idea of doing in-person work was impossible.”

She had to go completely online. “I was very nervous. Digital work has a learning curve,” she said.

Love studied up on lighting, shooting video and photographing herself. She also ramped up her social media, including her OnlyFans account, a paid platform for sexual content.

Meanwhile, she’s had other responsibilities. Love’s grown daughter and grandchild have been at home all day, every day.

After some lean months, Love made $72,000 before taxes last year. That’s what she earned pre-pandemic. But she’s got a following, and has been doing this work for 26 years.

Other sex workers aren’t making that kind of money, says Mireille Miller-Young, a feminist studies professor at the University of California, Santa Barbara.

“Sex work was among a kind of array of jobs that are incredibly vulnerable and precarious, like in the gig economy where you’re not protected,” Miller-Young said.

But a lot of people have turned to this type of gig. OnlyFans said it had over a million people selling content on the site in December. That’s nine times more than the year before.

And the market was already saturated, said Angela Jones, a sociologist at Farmingdale State College.

“Now you have this influx of people who are looking for work online,” Jones said. “We all know what happens in saturated markets, what happens to wages.”

This week, Jones and Miller-Young were among the researchers asking for the repeal of the so-called 2018 FOSTA-SESTA laws that were meant to stop online sex trafficking.

Along with other safeguards, they compel social media platforms to censor certain posts. Love said that had other consequences.

“It penalized people who were doing consensual sex work from being able to have access to the platforms that they need to drive traffic to platforms where they make money,” she said

And that, she said, ends up especially hurting people who are doing this just to get by. 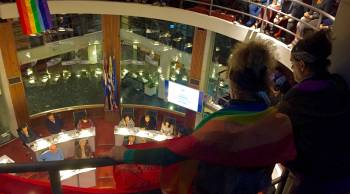 How long will it be until the economy is back to normal?

It feels like things are getting better, more and more people getting vaccinated, more businesses opening, but we’re not entirely out of the woods. To illustrate: two recent pieces of news from the Centers for Disease Control. Item 1: The CDC is extending its tenant eviction moratorium to June 30. Item 2: The cruise industry didn’t get what it wanted — restrictions on sailing from U.S. ports will stay in place until November. Very different issues with different stakes, but both point to the fact that the CDC thinks we still have a ways to go before the pandemic is over, according to Dr. Philip Landrigan, who used to work at the CDC and now teaches at Boston College.

How are those COVID relief payments affecting consumers?

Payments started going out within days of President Joe Biden signing the American Rescue Plan, and that’s been a big shot in the arm for consumers, said John Leer at Morning Consult, which polls Americans every day. “Consumer confidence is really on a tear. They are growing more confident at a faster rate than they have following the prior two stimulus packages.” Leer said this time around the checks are bigger and they’re getting out faster. Now, rising confidence is likely to spark more consumer spending. But Lisa Rowan at Forbes Advisor said it’s not clear how much or how fast.