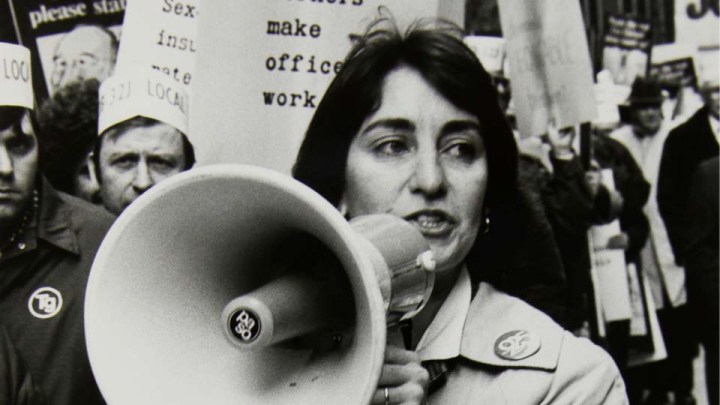 COPY
"We had to carve out our own space both in the women's movement and the labor movement," said Karen Nussbaum, co-founder of the 9to5 movement. Walter P. Reuther Library, Wayne State University
EEC: Documentary Studies

"We had to carve out our own space both in the women's movement and the labor movement," said Karen Nussbaum, co-founder of the 9to5 movement. Walter P. Reuther Library, Wayne State University
Listen Now

“9to5: The Story of a Movement” is available to stream online and on the PBS Video app throughout February. You can find our interview with filmmakers Julia Reichert and Steven Bognar here.

There’s a moment in the new documentary “9to5: The Story of a Movement” where Karen Nussbaum recounts an experience she had while working as a secretary at Harvard University in the early 1970s:

Karen Nussbaum: It was noon. There was nobody else in the office except for me. A student comes in and looks me dead in the eye and says, “Isn’t anybody here?”

Can’t you see me? I’m right in front of your eyes. I’m here.

Nussbaum would go on to found 9to5, a labor movement for those who had become the single-largest sector of the U.S. workforce: women office workers.

The movement inspired the 1980 comedy “9 to 5” starring Jane Fonda, Lily Tomlin and Dolly Parton. Nussbaum later served as the director of the Department of Labor’s Women’s Bureau during the first Clinton administration, and is the founding director of Working America, the largest non-union workers’ group in the U.S.

How the movement started

9to5 focused on improving pay and working conditions for women around the country. But at the beginning, it was the feeling of being invisible as a woman office worker that propelled the Nussbaum and 9to5 co-founder Ellen Cassedy into action.

“[It was] the notion that somehow we were expendable, not important, not even worthy of knowing our names very often,” Nussbaum said in an interview with “Marketplace Morning Report” host David Brancaccio. “We had members of the organization who said their bosses couldn’t keep them straight when there were two women in the office.”

It was only when the organizers looked into the data that they realized that women clerical workers, many of whom held college degrees, generally earned less than factory workers.

Nussbaum and Cassedy started in Boston, distributing a newsletter to secretaries around town and holding meetings at the local YWCA. They started organizing around issues like low pay, harassment and nonexistent job descriptions that left them doing personal errands for men in their offices.

An early victory came when organizers discovered that major employers in Boston were secretly meeting to set wages for clerical workers, which was illegal. Through inside tips from secretaries, organizers figured out where and when the meetings took place, and they confronted the employers — who showed up with boxes of keypunch cards used to track clerical data.

After exposing the companies publicly, organizers went to the Massachusetts Attorney General. The practice ended and many employers were forced to increase clerical workers’ pay by 10% or more.

“Those changes were the kinds of fights that showed that you could go up against the boss,” Nussbaum said. “You could beat them at their own game by showing the power of working women. And it was exhilarating.”

Soon, 9to5 chapters sprang up in cities across the country. Clerical workers leveraged media to bring attention to their working conditions, often through ridicule — like holding contests for the worst boss of the year (one winner interviewed on “The Phil Donahue Show” asked his secretary to pick up a woman for him at a bar).

Throughout, 9to5 organizers were conscious not to alienate women who supported the movement’s goals but didn’t think of themselves as feminists.

“We had to carve out our own space both in the women’s movement and the labor movement, a place where you didn’t have to know the secret words or agree with the set of assumptions in order to begin to organize for change,” Nussbaum said.

9to5 turned to forming their own national union within the Service Employees International Union, SEIU District 925. It was not without obstacle, both within the male-dominated world of union organizing and from corporate pressure during the rise of union-busting in the 1980s. Eventually District 925 was forced to merge with other SEIU locals.

“We felt we had this tremendous momentum in the 1970s. And we did, but we didn’t see what was coming in the 1980s,” said Nussbaum.

In 1981, soon after 9to5 announced the national expansion of their union, President Ronald Reagan fired more than 11,000 striking air traffic controllers in a move that Nussbaum says ushered in a new era of corporate hostility to labor organizing.

“It was the opening shot on what now became a national campaign, backed by the federal government, to get rid of unions,” she said. “And that’s been the trajectory that we’ve lived under for the last two generations.”

Nussbaum acknowledged the significant strides women have made in the workplace since she started 9to5, thanks in part to the organization’s efforts, but said there’s still a long way to go.

“Women were allowed to become managers and professionals. And now women enjoy many more opportunities,” Nussbaum said. “But that was true largely for middle-class women, for white women. But for the rest of working people, women and men, things got much worse.”

“We need to now look at, how do we learn the lessons from the 1970s?” she asked. “We’re in a similar period of upheaval. How do we make sure that we make advances in this next decade, not just for a few, but for the many?”

Click the audio player above to hear the full interview between Nussbaum and Brancaccio.