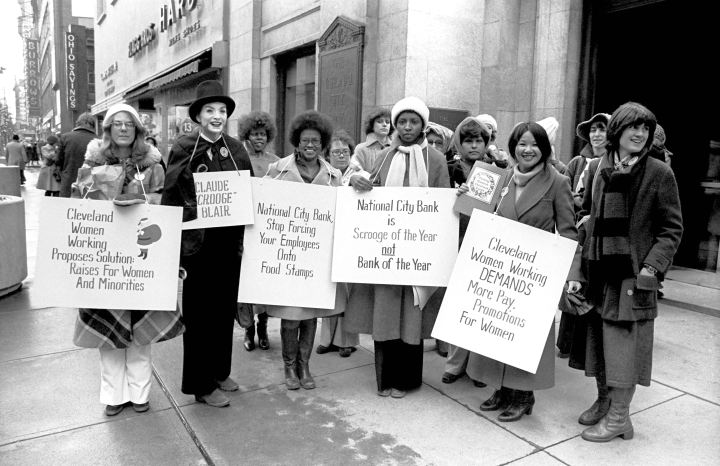 “9to5: The Story of a Movement” is available to stream online and on the PBS Video app throughout February. You can find our interview with 9to5 co-founder Karen Nussbaum here.

That’s the context for the 9to5 movement, a women’s labor movement which later inspired the 1980 comedy “9 to 5” with Jane Fonda, Lily Tomlin and Dolly Parton. 9to5 was a grassroots organization of women office workers who demanded better pay, working conditions and opportunities for advancement in the corporate workplace.

The story is chronicled in the new documentary “9to5: The Story of a Movement.” “Marketplace Morning Report” host David Brancaccio spoke with Julia Reichert and Steven Bognar, who produced and directed the film. The following is an edited transcript of their conversation.

Julia Reichert: Secretaries were viewed as office wives: “Clean my dentures, go out and get my lunch, make coffee for the whole group, yes, sew up the pants.”

We actually have archival footage of the boss and his secretary talking about how she feels about sewing up his pants while he has them on. And you look at her face, and it’s a very striking combination of, “I better smile!” to, “This was totally creepy.”

Remember, this was before the word sexual harassment. And 9to5 was among the organizations leading to really make us aware of that, and to create laws, which we now have, that will protect women against those forms of sexual harassment — like sewing up your boss’s pants while he has them on.

Steven Bognar: And you know, the 9to5-ers had all kinds of wonderful tactics. They gave out the “Pettiest Office Procedure Award” or the “Bad Boss of the Year Award.” They went on Phil Donahue and brought their bosses with them and shamed them on national TV. They’d call the local TV channels anytime they were going to ambush a boss to present them with some kind of bad award. It was all with a smart, sharp sense of humor, and it just leveraged public opinion in a really good way.

David Brancaccio: Julia, what do you make of the section in your film where Mary Jung, a 9to5 activist in Cleveland, is talking about organizing, and she finds that some of these office workers say they’re not feminists? But she notes:

Brancaccio: “Actions” seemed more acceptable to the mainstream. But isn’t that interesting? “I’m not a feminist, but I believe in feminist principles.” You see that even to this day, right?

Reichert: Oh, absolutely. And Mary was very creative, and when she talks about actions, an example is passing out balloons that say, “Equal pay for equal work,” as opposed to leafleting people — “we’re angry workers.” Just passing out balloons in downtown Cleveland. She’s a really good organizer, and a good organizer recognizes, what is the community we’re trying to reach? And let’s not have a litmus test [where] you have to agree to these principles of feminism in order to be part of our group. No, let’s just get together on what we can agree on.

Brancaccio: 9to5 grapples with, of course, class issues, but there are also issues of race. So there’s a part where Renia Clay, an activist with the Atlanta chapter, says:

Renia Clay: We met with the Boston chapter, and they were having issues in recruiting Black women. So Verna [Barksdale] said, “Well, do you eat lunch with them? Do you live near them? Do you socialize in any manner with them?” And the answer is “No, no, no.” Well nobody believes that you want to help them when you don’t talk to them anytime, you don’t ask them to lunch, you don’t live near them, their children don’t play with your children.

Brancaccio: It’s interesting that these issues of race also play out in this, and the best ways for the 9to5 movement to be inclusive.

Bognar: Well, different cities had more or less success with that. Atlanta had African American leadership. Verna Barksdale was the first leader and she set a great standard for inclusivity. But then Boston struggled more. And now, Boston’s a whiter city than Atlanta. But, you know, they were trying. They had successes, they had failures. But even before concepts like intersectionality were in the air, the 9to5-ers were grappling with trying to be inclusive.

Reichert: I think [9to5 was] kind of ahead of their time in a lot of ways, and one of them was how much they really thought about and organized around inclusivity with class and race. Cleveland is another example where there was African American leadership. Who’s up at the microphone? African American women. Who’s writing leaflets? Who’s at the demonstrations? Women of color, in addition to white women. And that was ahead of, in many ways, the labor movement of that time. The labor movement at that time had very few women leaders and did not have many leaders of color. 9to5 did, though.

Brancaccio: Well, I mean, that’s really vivid in your film, in which the 9to5-ers reach out to other unions. And, early on in the 70s, consciousness needed to be raised in the traditional unions:

Karen Nussbaum (9to5 co-founder): We talked to 10 different unions. And some were clueless, where they said, “We’d do more organizing here if I could just get a girl in to answer the phones more often.”

Helen Williams (first organizer, 9to5 Cleveland): You didn’t feel like you were sitting with somebody who considered you their equal. It was just like, “you little girls,” patting-on-the-head, kind of, attitude.

Kim Cook (organizer, 9to5 Seattle): They would say things like, “You don’t know what you’re talking about. You’re all too young and green to really know what it means to be in a union.”

Brancaccio: Well, that’s one of the reasons they created their own, right?

Bognar: Yeah. They’re being talked down to, and then they’re told, “You’re going to be union organizers, but we’re not going to pay you what we pay our male organizers.” And that was the whole point of creating a union. And yet, here the labor movement itself was failing them, these old stodgy, cigar-smoking guys.

Reichert: And the labor movement has changed a lot since then. Many of the people in the film went on to continue to work in the labor movement, but continued to push for it to have more women leaders, a more feminist approach to organizing. And 9to5 had a big impact on the labor movement. Even though it was not a huge number, the ideas and the practices were really, really strong.

Brancaccio: The Jane Fonda, Lily Tomlin and Dolly Parton movie is a kind of a cartoon version of all of this — but in your film people feel that movie version helped the cause?

Reichert: I would call it a satire. And it was a very good choice to make it a satire because, as a satire, you kind of pass over the question of, “Are women exploited?” And millions of women around the country saw that movie.

Bognar: It was the No. 2 box office hit of that year after “The Empire Strikes Back.” It was a huge hit.

Reichert: People saw it again and again. And it actually raised the prospects of the 9to5 national organization —  which at that point was not a labor union. It was simply an association which had been around for going on 10 years at that point. And the “9 to 5” Jane Fonda movie grew out of that movement. After the movie came out, they decided, the timing is right, let’s go for forming a women-led national union of clerical workers.

And of course, within months, President [Ronald] Reagan backed the union busters and busted the air traffic controllers union. So their new union was born at a very, very unfortunate time in American history. They prevailed, they did organize thousands of women, but it never got big enough to really stand on its own.

The legacy of 9to5

Reichert: Yes, it is. SEIU has been a real leader. The head of SEIU is a woman, Mary Kay Henry. And they’re probably, that and maybe CWA, the communications workers, are some of the unions that are most interested in spending resources on organizing unorganized, low-wage workers, like a lot of immigrant workers, health care workers, daycare workers, home health workers. And you know, 925 the union is still very active in Seattle. And that is the very first city that passed the $15 minimum wage. And I think that’s because of the big influence of the local 925 chapter there.

Bognar: And 9to5 the organization is still around as well. They have three headquarters in Atlanta, Milwaukee and Denver, and they’re still fighting the good fight as well.