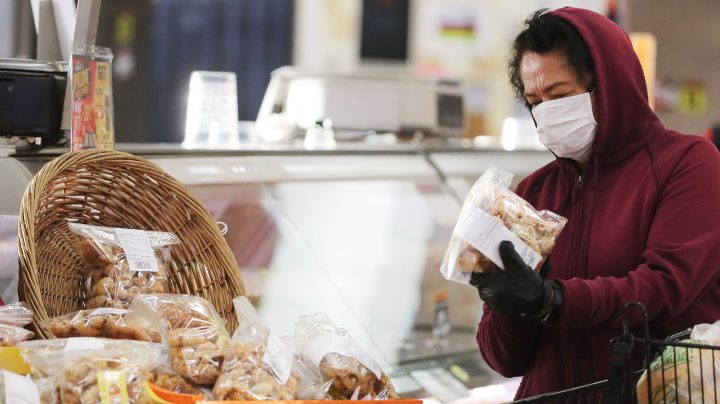 COPY
More people are getting their food from grocery stores during the pandemic and saving money in the process. Mario Tama/Getty Images
COVID-19

More people are getting their food from grocery stores during the pandemic and saving money in the process. Mario Tama/Getty Images
Listen Now

When Alex Bianchi does his weekly grocery shopping, he is very aware of how much he’s spending, thanks to his phone calculator.

“Every time I add something to my cart, I’ll add it on the calculator,” Bianchi said. “That’s kind of how I try to keep my spending curbed a little bit.”

But Bianchi, who’s 23 and lives in North Carolina, used to go to restaurants regularly, and he wasn’t going to break out the calculator there.

“It’s a little weird to do that in a restaurant, especially if you go with a friend. They’re like, ‘Alex what are you doing?’” he said.

It’s easy to spend more than you’d like when you’re out at a restaurant or a bar. Now, Bianchi is cooking almost all his meals at home because of the pandemic. And he’s saving about $200 a month.

Jillian and JL Johnson, who live in Missouri, used to eat at restaurants a lot. Now they get most of their food at the grocery store.

“We’ve saved so much money and so many calories,” Jillian said.

Also, it turns out they like cooking together. It’s a bonding experience.

“We set all the smoke alarms of the house off this week making our own flour tortillas. It was great,” JL said. “Apparently it’s known that like if you don’t set your smoke alarms off, you’re not doing it right, so.”

They expect to go back to restaurants when things open up — just not as much.

Chris Stover in California is really missing restaurants. He used to go out with his co-workers near their Sacramento office for coffee, for lunch and for drinks after work.

“That whole social routine has been disrupted,” he said. “And it’s starting to feel like it’s not coming back.”

And it may not come back. He’s working from home 20 minutes away from the city, and it looks like that’s gonna be permanent.

“I’m devastated by the fact that I’m gonna end up making sandwiches in my kitchen for lunch every day,” Stover said.

One person who thinks he might actually eat out more after the pandemic? Alex Bianchi. He likes saving money. But there are so many restaurants he wants to explore.