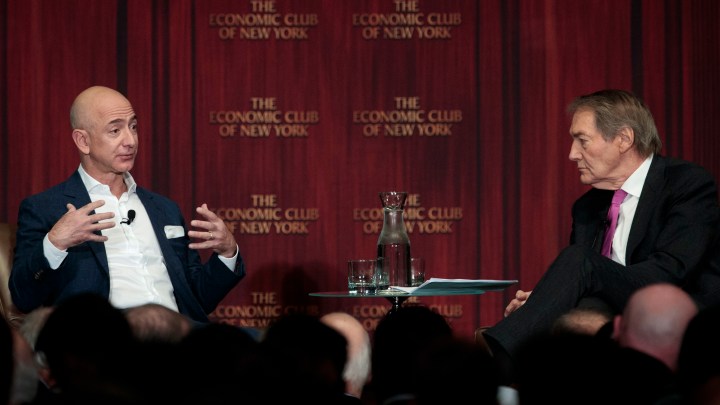 COPY
Jeff Bezos will most likely maintain plenty of power at Amazon. Above, Bezos, left, addresses moderator Charlie Rose and the Economic Club of New York in 2016. Drew Angerer/Getty Images

Jeff Bezos will step down from his job as the CEO of Amazon, and Andy Jassy, the head of Amazon’s cloud computing division, will take over that role. But Bezos isn’t leaving Amazon. He’ll go from being chief executive officer to the company’s executive chairman. But what exactly does that mean?

The executive chair is a strategic adviser to the CEO, said Mary-Hunter McDonnell, associate professor of management at the University of Pennsylvania’s Wharton School. The chair is also head of the company’s board of directors, whom the CEO is accountable to.

McDonnell said becoming executive chair allows the former CEO to have a lot of say in the company’s direction, “but also not be the person who’s ultimately, you know, accountable for the strategic successes or failures of the company going forward.”

And since Bezos already owns millions of Amazon shares, he’ll really have a lot of say in this role, according to Matthew Slaughter, dean at the Tuck School of Business at Dartmouth College.

“This is probably one of the most unique ones in terms of the chair, having been the founding CEO and also having such a large ownership stake in the organization,” he said.

The CEO to executive chair switch is called the apprenticeship model of succession — Bill Gates did it at Microsoft, Eric Schmidt at Google, Bob Iger at Disney.

“You start to then see power struggles between the current CEO, who might think that the executive chair is exerting too much influence or holding them back too much,” he said.

There can be battles for the board’s favor and the new CEO’s fate, but Kelley said since Bezos owns so much of Amazon, whatever he wants as chair will probably still happen.