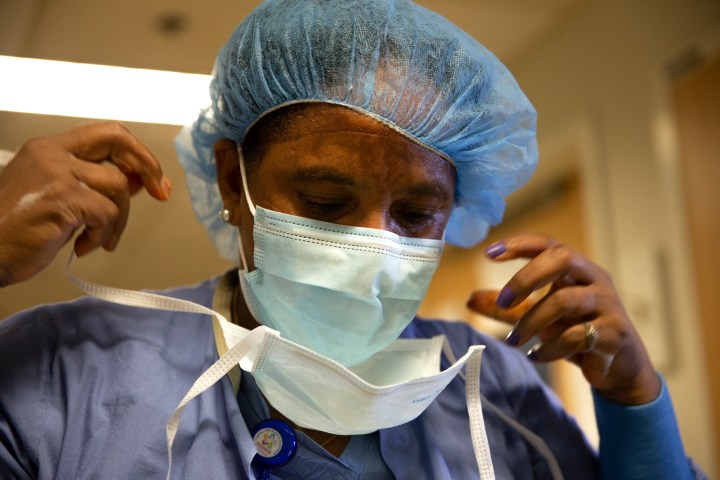 COPY
"Like any sorority, white feminism does have specific parameters for anyone who wants to join their cause," writes Beck. "Just ask those beyond the parameters." Above, a woman removes two masks after disinfecting a hospital room used by a COVID-19 patient. Karen Ducey/Getty Images
Shelf Life

"Like any sorority, white feminism does have specific parameters for anyone who wants to join their cause," writes Beck. "Just ask those beyond the parameters." Above, a woman removes two masks after disinfecting a hospital room used by a COVID-19 patient. Karen Ducey/Getty Images
Listen Now

In 2020, women were disproportionately affected by job loss and left the workforce in record numbers, prompting some to label COVID-19 a “disaster for feminism.” But what is “feminism,” and who gets to decide what it looks like? That’s part of what Koa Beck explores in her new book, “White Feminism: From the Suffragettes to Influencers and Who They Leave Behind.” Click the audio player above to hear her conversation with “Marketplace” host Kai Ryssdal. The following is an adapted excerpt from the book.

“Feminist” used to be a dirty word in modern popular culture. At the height of her influence in 2012, after being praised for producing “empowerment” anthems for young women, Taylor Swift famously denied that she was a feminist to a Daily Beast reporter. Her response, which would evolve in the coming years, conveyed a belief in gender parity while dodging the term. “I don’t really think about things as guys versus girls. I never have. I was raised by parents who brought me up to think if you work as hard as guys, you can go far in life.”

It was quintessential “I’m not a feminist, but . . .” a recurring and well-documented cultural shorthand in which equal rights were espoused but allegiance to feminist ideology was evaded. Swift, while a prominent example of this, was part of a larger cohort of pop icons who made similar statements. That same year, Katy Perry said at Billboard’s Women in Music luncheon, “I am not a feminist, but I do believe in the strength of women.” The following year, in 2013, Kelly Clarkson told Time that she has “worked very hard” since she was a teenager, but “I wouldn’t say [I’m a] feminist, that’s too strong. I think when people hear feminist it’s just like, ‘Get out of my way I don’t need anyone.’ ” Earlier that year, then newly appointed Yahoo! CEO Marissa Mayer explained, “I don’t think that I would consider myself a feminist. I think that, I certainly believe in equal rights.”

So it’s no surprise really that the first time I heard Beyoncé’s 2013 song “***Flawless,” which included a clip of Chimamanda Ngozi Adichie’s explosively popular 2012 TEDxEuston talk “We Should All Be Feminists,” I expected the sound bite to cut right before the word “feminist.” That’s how sanitized the mainstream culture was of that term. The fact that the word and its extended definition were included in their entirety came across as very, very intentional. The pivotal moment when Beyoncé stood before prominent “FEMINIST” signage at the 2014 MTV Video Music Awards7 drove home the signature pink-and-black possibility that you could be an internationally top-selling female vocalist and care about systemic gender inequality — or so I thought. Like many journalists and writers at the time, I initially saw this strategic declaration as progressive, informed by the fact that I had honestly never seen anything like this come out of pop culture in my relatively brief lifetime, nor had others.

Barbara Berg, a historian and author of “Sexism in America,” told Time after the VMAs that “[i]t would have been unthinkable during my era.” Roxane Gay, who had just published her essay collection “Bad Feminist” a few weeks before, said on Twitter, “What Bey just did for feminism, on national television, look, for better or worse, that reach is WAY more than anything we’ve seen.” And Jessica Valenti facetiously tweeted a screencap of Beyoncé’s shadowed silhouette before the blaring “FEMINIST,” stating, “Really looking forward to the next magazine piece calling feminism dead or irrelevant.” Unequivocally, Beyoncé had moved the proverbial needle between pop culture and feminism.

But when you see “FEMINIST” as a set prop during the VMAs, what does that even mean? What does a feminist stand for?

If “feminism” is presented as a hot new trend among elite women like Beyoncé, then that same math works backward too: elite women are, and always have been, the trendsetters for feminism. They will dictate the decor in the proverbial “room of one’s own.”

In the 1910s, it was the suffragettes actively courting the interest of popular actresses Mary Pickford and Ethel Barrymore, both young, glamorous women who were challenging conventional understandings of gender with their very public personas and professional prowess, dual aberrations for women of the time. Pickford was one of the first American actresses to be a powerhouse with instant name recognition. She set the template for hearing the name “Jennifer Lawrence” or “Julia Roberts” and knowing exactly who that is, down to their hair color, dress, and most recent films. From the acclaimed Barrymore acting dynasty, Ethel stood out for her unparalleled talent but also for her multi-disciplined passions: she read Henry James, she wrote short stories, she wrote plays — and she had “swish.” In short, both women were brands.

Since the beginning of organized women’s rights in the United States, white feminism has lurked, adapted, and endured —rebranding and reincarnating alongside the revolution of its day. Women like Barrymore and Pickford lended a chic allure to suffrage with the added dimension of instant press coverage. (In 1910, when Barrymore attended a suffrage meeting, the New York-based Morning Telegraph went with the headline “Ethel Barrymore is a suffragist.” The musical nature of that headline is the mellifluous sound of a suffrage PR director getting promoted.)

Beginning an explicitly feminist mission from within posh circles runs just as deep as the movement itself. Throughout my own career, people I’ve worked with and interviewed have assured me that this strategy is unintentional, and that everyone is welcome to the movement, if they just claim the “F” word. But, like any sorority, white feminism does have specific parameters for anyone who wants to join their cause. Just ask those beyond the parameters.

Copyright © 2021 by Koa Beck. From the forthcoming book “White Feminism” by Koa Beck, to be published by Atria Books, a Division of Simon & Schuster, Inc. Printed by permission.