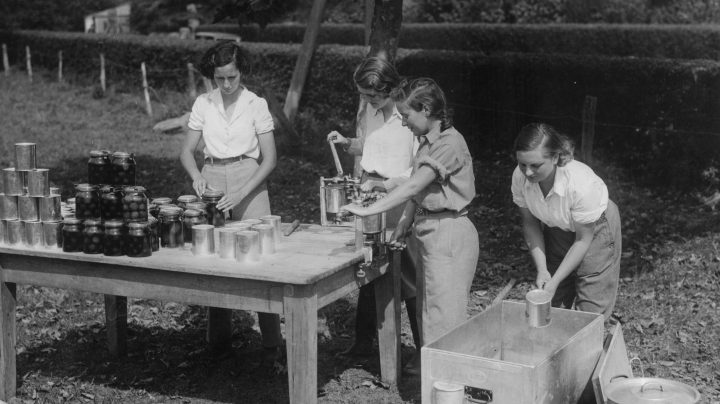 COPY
Demand for Mason jars surged in 2020, but this isn’t the first time that’s happened during a period of instability. Above, girls can plums in 1944. Fox Photos/Getty Images
COVID-19

Demand for Mason jars surged in 2020, but this isn’t the first time that’s happened during a period of instability. Above, girls can plums in 1944. Fox Photos/Getty Images
Listen Now

On the long list of consumer product shortages in 2020 is the humble Mason jar. But unlike the shortages of yeast, desks, bicycles and other hot products this year, the surge in Mason jar demand is not unique to 2020. Freelance journalist Jen Doll wrote recently for Medium’s Marker about why demand for canning supplies tends to cycle with economic uncertainty. She spoke with “Marketplace” host Kai Ryssdal about what 2020’s Mason jar shortage says about the state of our economy. The following is an edited transcript of their conversation.

Kai Ryssdal: I will quote you back to yourself as the first question in this interview. You say in this piece, “There may be no better barometer of the state of our economy than the Mason jar.” Discuss.

Jen Doll: Well, when I started digging into this story, I talked to several historians. And you know, not only are there Mason jars that have been with us since the late 1800s, there are also Mason jar historians. And the thing that they all told me was this isn’t anything new. This happens every decade, every 12 years. The runs on Mason jars tend to occur when there is some kind of economic instability, recessions, in wartime, basically, anytime that people start to freak out about where they’re going to get their food, if they’re going to have enough food, what is happening in the world. I want to also just clarify that really, the lids are the things that sell out, more so because you can’t reuse them or you’re not really supposed to reuse them.

Ryssdal: So as I was saying, before we got going, we’ve got a zillion Mason jars in my house. I don’t think we have more than a lid, maybe two anyway. Is the thinking that canning and putting up preserves and whatever one does with a Mason jar, we’re like nesting and that makes us feel better?

Doll: Yeah, totally. I mean, it is that it’s also truthfully, like, if you don’t know where your food is gonna come from, it’s also sort of a more psychological need to find control wherever you can. So you know, if you are canning your own food, at least you’re like, “I’ve got that covered.” And you know, it makes sense. Like, we’re baking bread, we’re making our own kombucha, we’re doing all of these things, and canning kind of goes along with that.

Ryssdal: No, it’s totally of a piece. Let’s say I get motivated upon hearing this interview, and I decided to start canning. Can I go on Amazon and get myself a 12 pack and everything’s gonna be fine?

Doll: You may be able to do that now. You know, during the summer and fall, it was very hard to find these jars, and lids as well. There was like some really high price gouging going on, also there’s a problem of [brands] who are not Ball trying to put off their jars as Ball products.

Ryssdal: I’m sorry, we’re in counterfeit Mason jar territory now, is that where we are?

Doll: Yes. It’s that crazy. That said, there are tons of distributors, and you can probably find them online at this point, because the canning season for the year is pretty much over. That also said, there are people who can all year-round, so who knows. Good luck.

Ryssdal: Totally. And look, if you’re a dedicated canner, you’re gonna can. There are though — this is the wrong word — but there are off-peak uses for Mason jars, right? And by “off peak,” I mean, when we’re not in a recession and deeply stressed, people are using Mason jars for all kinds of things nowadays.

Doll: Totally. And it makes sense, because if you’re a manufacturer of canning jars, during times when jars are not selling out, Ball and other manufacturers have been marketing these jars for all kinds of other uses, like, you know, putting your beans in, using as decorative items, Mason jar candles, Mason jar wedding glasses. You know, you [have] to have a Mason jar at your farm-to-table wedding.