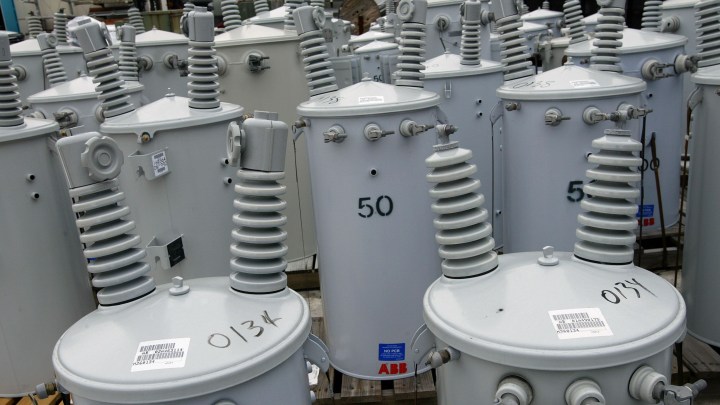 COPY
Transformers act like an interface between the power grid and a home or business. The current shortage of transformers is frustrating for utility companies. Justin Sullivan/Getty Images

Transformers act like an interface between the power grid and a home or business. The current shortage of transformers is frustrating for utility companies. Justin Sullivan/Getty Images
Listen Now

There’s a lot of movement in a brand-new, 155,000-square-foot industrial space in southeast Austin, Texas. Forklifts and pallet jacks are moving stuff all over the place.

“This is kind of our machines-assembly area,” says David Racino, co-founder and CEO of the building’s occupant, American Canning. “So we build small-scale fillers and can-handling equipment, really for the craft beverage space in this area.”

Business is booming, but this facility is way behind schedule. Electricians and plumbers are doing work right now that American Canning had hoped would be done over the summer.

“So, instead of growing our business, we’re triaging issues that we didn’t even know could exist, much less were going to persist for, you know, four to six months,” Racino says.

One of the issues that set the project back was a monthslong wait for a transformer.

“There’s evidently only one supplier that’s authorized that makes these on the planet,” he adds. “The problem with that is when that supplier gets backed up, it impacts all of their customers that are in construction projects.”

He’s exaggerating a little bit — there are actually three manufacturers. But it still took American Canning months to get the transformer it needed because lots of businesses need lots of transformers.

“It’s a phenomenally simple, effective, reliable device that transforms either from a low voltage to a high voltage or a high voltage to a low voltage,” said David Tuttle, a research fellow at the Energy Institute of the University of Texas at Austin. “To transport the electricity long distances, what was discovered is that if you can step up the voltage, the more you step it up, the lower the losses.”

A transformer is something like the interface between your home and the local power grid, the place where you work and the power provider — pretty much anywhere there’s electric service.

This means the shortage is especially painful for utility companies.

“We are communicating that with our customers on the front end as far as the lead times with these transformers go,” said Jeff Bradford, director of field operations north at American Canning’s utility, Austin Energy. “They’re upwards of, some of the larger customers, you know, larger transformers are upwards of 52 to 64 weeks out. So they’ve got, like, a year lead time.”

It’s true nationwide. Joy Ditto — who is president and CEO of the American Public Power Association, a trade group that represents community-owned utilities like Austin Energy — said her members sent a letter to the federal Department of Energy to let policymakers know just how dour the situation is.

“This is fundamental to doing business in the electric sector,” Ditto said. “And we haven’t, we have not — at least in recent memory — seen anything like this in the distribution transformer side.”

The transformer shortage isn’t the only issue that delayed American Canning’s new facility, though.

Racino pushes buttons on what looks like an iPad to start up a machine called a CP4 — which stands for counter pressure four-head. It fills and seams cans, filling 24 cans in a minute with whatever liquid you want them to hold.

Earlier this year, American Canning couldn’t source the LED screens for a unit like this. So the company had to reengineer it with the available screens, which were older. That delayed capitalizing on new business opportunities.

“So, sometimes people don’t realize one little component out of this whole 155,000 square feet, you got one little piece of plastic and metal that holds up our ability to use the space,” Racino says. “There’s a lot of money sitting here that a small, growing business like us can’t really afford to eat for, you know, the better part of a quarter to a third of the year.”

Because everything on the supply chain side is so touch and go, Racino says companies like his should be prepared to re-prioritize and change plans on a dime. 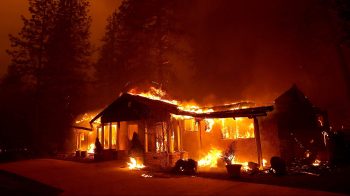