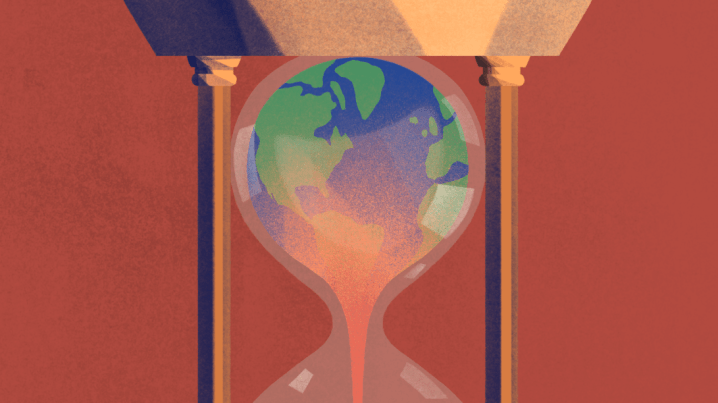 COPY
Illustration by Sylvia Li
How We Survive

The effects of climate change are more obvious every day: record-breaking heat, extreme storms, devastating drought, wildfires and catastrophic flooding. And as the world reckons with how to slow the warming that’s driving this changing weather, we’re also figuring out how to adapt to it. How to survive it.

Adaptation, also called resilience in the climate world, has been a relatively small part of the climate conversation. One study from the Climate Policy Initiative estimates that we spent $30 billion on climate adaptation from 2017 to 2018. But experts say we should be spending a lot more: $180 billion every year over the next decade on solutions like early warning systems for floods and storms, more resilient homes, buildings and infrastructure, better water management and more resilient crops. And that potential spending, according to the Global Commission on Adaptation, would result in more than $7 trillion in benefits.

That investment is starting. Much like the pandemic changed the way we live, climate change is forcing us to change how we think — about a new reality of extreme weather and changing landscapes. The people who can afford to are, in some cases, making major changes to their homes and their lives. They are buying generators and solar-powered batteries to keep the lights on when the power goes out. They’re installing air conditioning in parts of the country that didn’t used to get so hot. They’re shopping for houses that are farther away from sea level rise. And they’re trying to make their houses more resilient.

Brian Rankin owns a place right on a creek on Maryland’s Eastern Shore. It was built in the ‘60s and flooded during Hurricane Isabel in 2003. He bought the house in 2015, but could see evidence of the flood. “You can basically see where the plywood was stained,” he said. “[It] is much, much darker.”

Rankin renovated the home with surviving future floods in mind. The problem, he says, isn’t just water coming in, but that it can get trapped inside the house and the foundation. “So, we installed smart vents that, as the water recedes, they open up and let the water out of the house,” he said. The vents cost over a thousand dollars.

Rankin also installed chemical insulation in the house, as opposed to the pink fluffy stuff, which would be ruined if there was a flood. And he installed his outlets 3 feet above the floor, so that they wouldn’t short out in case of another flood.

He thought about even more radical adaptations, like a 4-foot wall around the property to keep the water out completely. “My wife thinks it’s a good idea,” he said. “I even thought about it. It’d be an astronomical expense, but you think about it.”

For now, when hurricanes come, they just … move stuff. This summer, when the Rankins thought Hurricane Isaias might hit the home, they moved all the mattresses, pillows and papers to higher floors. “And then you get tired and it’s like, ‘I should move that, too. But I’m too tired. I’ve been doing this all day. This thing, I could let go,’” Rankin said.

Some adaptations are pretty practical. Like the Rankins, you don’t think about how you’re adapting to climate change — you’re just getting necessities for the new normal. For some, though, as reality sinks in, like the extended fire seasons and smoky air in the American West, it’s just too much to take. Keith Helfrich, in San Francisco, started out with small adaptations around the house: He bought an air filtration system and a water distillation machine to improve the quality of the water he uses. But after California’s worst wildfire season ever, Helfrich has had enough.

“The fires were sort of a last straw for me. I’ve been one of those people saving and saving and saving, aspiring to purchase a house in the Bay Area,” said Helfrich, who is managing director of a data consultancy company. “And the climate migration research that I did just showed that millions of people from the southwestern United States are going to be forced to move north to Colorado, and west to California. And we already see that the society around us is filled with people with guns and conflict. And so, I just decided I’m going to move to Switzerland.”

Helfrich calls himself a “climate migrant,” and in some sense, he’s running for the hills. “It’s up in the Alps, insulated, both from cultural and societal conflict. And it’s centrally located to Western Europe,” he said. “I don’t want to be doing this. And I lament the feeling of necessity. And so even though I’m doing this, because it’s best for me, it’s not that I’m doing it because I want to.”

Helfrich is still in San Francisco, but migration will become common over time. A 2018 study said that 1 in 12 Americans in the southern half of the country would move west and northwest over the next 45 years solely because of climate change. The ones who can afford to move, of course. And that will profoundly increase inequalities between those who leave and those who must stay in increasingly hostile areas.

If Helfrich is an early adopter of climate migrations, Devine Lu Linvega and Rekka Bellum are living as though the worst is already here. They are partners, originally from Montreal, who also work together as a software developer team called Hundred Rabbits. They make games, and a few years ago, they decided they wanted to live as sustainably as possible, using as little energy as they could. So, they bought a sailboat, solar panels and a couple batteries.

They moved onto the boat and now document what they do to inspire others to become more resilient.

Linvega says the motivation behind their changed lifestyle is resilience, the idea that they can survive by using systems that won’t completely break apart. “We have a whole bunch of friends [and] we hope that they would be more resilient,” he said, though he admits his and Bellum’s choices aren’t for everyone.

“It’s not like you should totally go live on a sailboat and set it on the Pacific Ocean. It’s not replicable. It doesn’t scale,” Linvega said. “My take on this is like the only thing that people will listen to is the laws of thermodynamics. Like, when their house is on fire, then you’ll be like, ‘Hmm, how can I improve my system?’ It’s really hard to sell that people are going to gain things by trying to live closer to nature. You have to be so frustrated.”

They almost immediately had to adapt. When they set sail, they were designing games for iOS and realized that takes a hefty internet connection. “Sailing around the Pacific Ocean, the further we get away from America, the more our experience degraded,” Linvega said.

By the time they got to French Polynesia, Linvega had to take somewhat drastic measures. A new operating system update was about 10 GB, but they only had phone cards good enough for 5 GB of data. “So, we would put the SIM card on our phone, put it in a plastic bag, raise it on a mast. And then I would just try to download the update, monitor it as it downloaded slowly,” he said. “And as soon as the card expires, pull the phone down, change the card, put it up again. And hope it doesn’t crash. If it crashes, we have to start over again.”

He says that worked once or twice, essentially turning the ship into a giant antenna. “But this whole thing was just ridiculous. The breaking point is when I met another developer that was also doing that. And then we kind of like talked a bit and we’re like, ‘This is [expletive] stupid. We have to change the way we work.’”

So how to build less power-intensive software that didn’t need constant internet access and didn’t drain the tiny solar batteries they had on board? The team stopped developing for iOS and the web and started writing games in Assembly, the programming language used in the 1980s to create games for Nintendo’s classic NES. Those games can also run on modern systems with emulators.

“It seemed like a daunting task at first, because it’s not really well documented,” Linvega said, about Assembly. “But it’s actually so simple. It’s so beautiful. It’s elegant. And there are so few parts to learn that the way I look at it sometimes is just like operating like a power tool.”

“We’re not trying to scare people, we’re just trying to explore. We had the opportunity of trying some things in environments that feels like something closer to what post-apocalyptic life would be,” Linvega said. “But while these things are directly affecting our life, I think it has some value for people who are affected by California fires or people who are in a city where the grid often goes down. We see some value in trying to inspire others to try, at least.”

Adaptation on the scale of the entire planet will take more than a person, or a couple, or one house or one sailboat at a time. It will take a mindset shift on the scale of companies, businesses, even global finance. Luckily, that reality is starting to take hold.

Click here to read and listen to Part 2 on drought and fire.

Click here to read and listen to Part 3 on battery technology and green finance.

“How We Survive: Adapting to Climate Change” was edited by Michael Lipkin and produced by Stephanie Hughes with help from Jesús Alvarado and Rose Conlon. Scoring and engineering by Robyn Edgar and Ben Tolliday. Original music composed by Ben Tolliday.

Correction (Dec. 7, 2020): A previous version of this story misidentified the Climate Policy Initiative. It has been corrected.