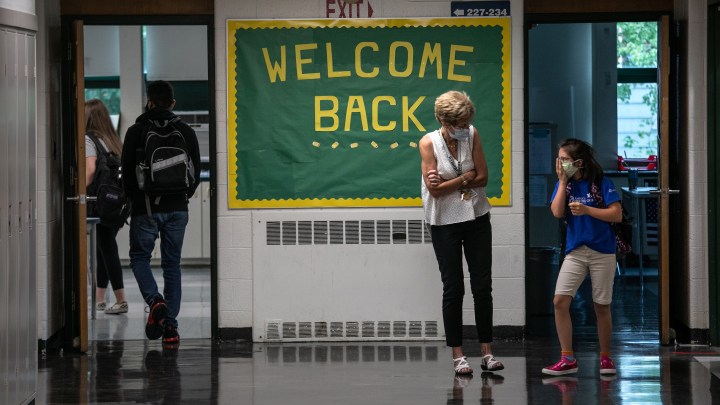 Most K-12 public schools in this country are funded based on daily enrollment and attendance figures. But in this extraordinary academic year, when about half of the nation’s public school students are attending class online due to the COVID-19 pandemic, how do districts and schools gather and gauge that data and get the funds they need?

Morcease Beasley, the superintendent of Clayton County Public Schools in the Atlanta area, expected about 3,600 kindergartners this year. Only 3,036 enrolled.

He’s been telling parents “you can’t skip kindergarten and then next year come into first grade and think you’re gonna get this host of services. And funding has been negatively impacted because of your actions.”

Most public schools get their funding from three primary sources: local taxes, less than 10% from the federal government and about half from the state.

But COVID-19 has slammed state budgets.

“The overwhelming majority of that funding, like 90% or more, comes from sales and income taxes,” said Mariajose Romero, a researcher at Pace University.

As the halfway mark in the academic year approaches, some schools are all virtual, some are in person and some are a mix. Home schooling has gained momentum, and private school enrollments are up in some places. And parents continue to make all kinds of decisions, including parents of kindergarteners who have decided to sit the year out.

All of that will have a continuing financial impact on public schools, said Hedy Chang, director of the nonprofit Attendance Works.

“What will states do next year as they determine how they will fund schools in the 2021-2022 school year?” Chang said.

One concern for school districts is that screen fatigue may drive down attendance as the year drags on. There’s already evidence of that, said Ben Court, an education consultant with EAB.

“Students were showing up for classes, but people are now getting tired,” he said.

In Georgia, Beasley of Clayton County Public Schools said right now virtual attendance is steady. But with lower enrollment, he knows next year’s finances may be unpredictable.

“We’ll just have to make those decisions at that time,” he said.

Public schools received Coronavirus Aid, Relief and Economic Security Act funding in the spring. Requests for more help from the federal government have stalled. So for now, every student who shows up — or logs in — adds to the bottom line.