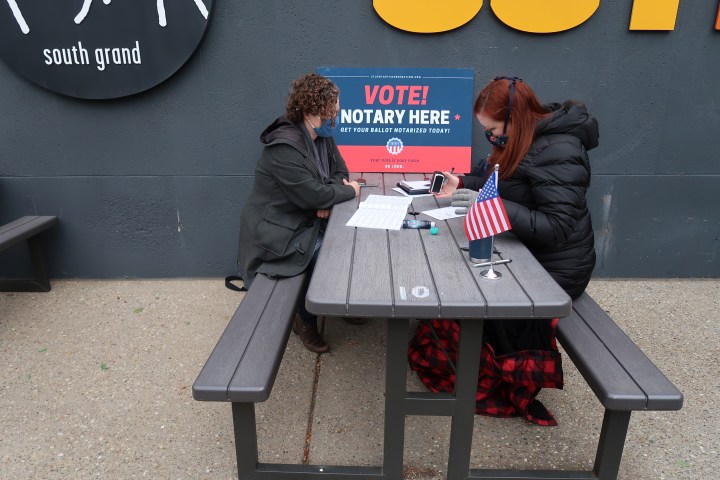 COPY
Jill Anderson guides Cynthia Barounis through the notarization process outside Rooster restaurant in St. Louis. A change to Missouri law allows most people to vote absentee or by mail, but mail-in ballots must be notarized. Kimberly Adams

Jill Anderson guides Cynthia Barounis through the notarization process outside Rooster restaurant in St. Louis. A change to Missouri law allows most people to vote absentee or by mail, but mail-in ballots must be notarized. Kimberly Adams
Listen Now

The 2020 election is unprecedented in terms of fundraising, campaign spending, TV ads and just about any other metric you can imagine. More people are getting involved as well, with record numbers of small-dollar donors.

Millions of people are also donating their time — as poll workers, campaign volunteers and even notaries. In some states, mail-in ballots require a notary’s certification, sending some voters rushing to find someone with the legal stamps and seals in the lead-up to the election.

In Missouri, for example, emergency legislation in response to the COVID-19 pandemic expanded the types of voters eligible to vote absentee, and created a new category of mail-in ballots for others. But Missouri Secretary of State Jay Ashcroft said the legislation was so rushed that it created a problem.

To get around the issue, he put out a call for volunteer notaries to provide the service, garnering hundreds of responses from churches and civic groups highlighting their availability.

Others, like Will Stevens of Webster Groves, Missouri, signed up just to provide services for the election. Stevens and his wife, Ashley, became notaries together and started The Notary Project, working with about a dozen other notaries to set up at farmers markets and other venues around the St. Louis area to notarize ballot envelopes.

“It seems like there’s a lot of opportunity to help where the best thing that you can do is donate money, and so I’m always looking for opportunities where your time is more valuable than the money they that you can contribute,” said Stevens, as he spent a chilly Saturday morning waiting to see if anyone needed notary services at Soulard Farmers Market in St. Louis. It was his fifth and final weekend on the task.

“We have the time to come out here on Saturdays and work out of the market,” he said. “We have time to meet people at their homes, at their places of work, wherever they’re going to be anyway to try and make it convenient for them to vote.”

Secretary Ashcroft said he’s seen anecdotal evidence that more people are signing up to be notaries because of the election law changes, but doesn’t have hard data as to how many of the 1,000 to 1,500 new notaries this year fit into that category.

Jill Anderson is one of them. She said she signed up during the August primaries, and has been working with STL Notary Coordination to get space at local businesses to notarize ballot envelopes.

“I think that the process in Missouri is needlessly and potentially intentionally difficult,” said Anderson. “And I think during a pandemic, we should be making it as easy as possible for everyone to exercise the right to vote.”

Anderson said she’s probably spent 60 to 70 hours notarizing more than 150 ballot envelopes, and spent about $100 on supplies, like her notary book and stamp, the required bond, and a bright red, white and blue sign. A sign made it easy for Cynthia Barounis of St. Louis to spot her outside Rooster restaurant, which was busy with the brunch crowd.

“I came here intentionally today because there was a listing posted [online] of notary events,” said Barounis. She said she doesn’t usually vote by mail, but wanted to this year because of the pandemic. “I’m just trying to keep everybody in my life safe and everyone in my community safe,” she added.

Anderson notarized Barounis’ ballot envelope and encouraged her to mail it quickly, as the U.S. Postal Service recommended all voters who are mailing ballots to get them in the mail by Oct. 27.