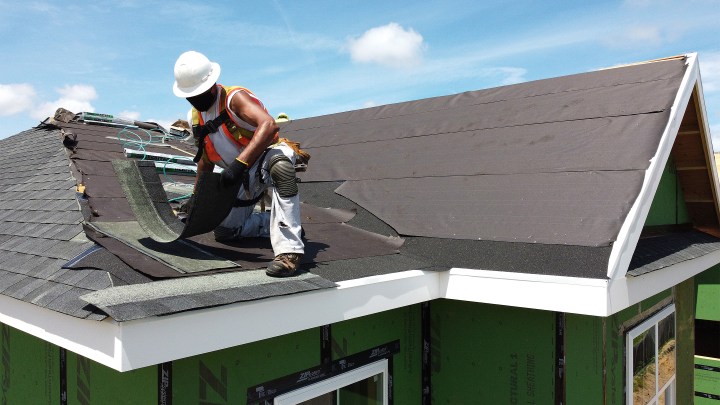 COPY
A construction worker roofing a New York residence in May. Housing starts were up more than 22% in July. Al Bello/Getty Images
COVID-19

A construction worker roofing a New York residence in May. Housing starts were up more than 22% in July. Al Bello/Getty Images
Listen Now

The Commerce Department reported Tuesday that builders broke ground on almost 1.5 million new homes in July — that’s up more than 22% from June. But those new homes won’t be cheap because prices for raw materials like lumber are skyrocketing.

Mark Konter has some bad news for his customers. He’s a homebuilder and part-owner of Konter Quality homes in Savannah, Georgia. He’s raising prices this week because the price he pays for timber is going through the roof.

The higher lumber costs will tack $8,000 to $14,000 onto the price of one of his new homes. The rising cost of two-by-fours is rooted in simple economics — supply and demand. The supply of timber is down because lumber mills shut down at the height of the pandemic. Housing demand, though, surged, according to Jerry Howard, head of the National Association of Home Builders.

“I don’t think anyone anticipated housing to come back this strongly, placing this much pressure on the demand for all the components that go into a house,” Howard said.

He said prices for hundreds of components that are made in China are also up. Remember the trade war? Nails, hammers and bathroom fixtures are all subject to hefty tariffs. Still, housing demand won’t fall anytime soon, said Oxford Economics lead economist Nancy Vanden Houten.

“People want to have larger homes where they can work from home,” Vanden Houten said. “They want space to be outside if social distancing is something that’s going to be with us for a while.”

Vanden Houten said as long as interest rates stay low, buyers won’t be scared off by the higher prices.