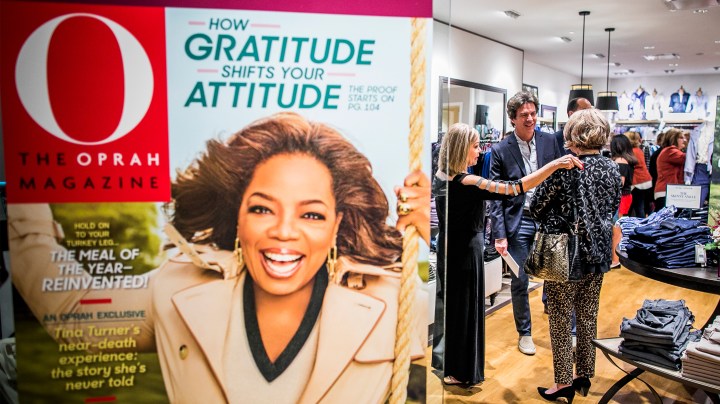 You have a few months to say goodbye to O, the Oprah Magazine. Publisher Hearst has announced that this year’s December issue will be its last regular print edition.

It’s the latest in a long line of glossies that have either stopped publishing altogether — Redbook and Glamour — or “paused” publication. That’s what W did a few months back.

The glossies were already struggling. Then came the COVID-19 pandemic.

“This could be the final straw that some of them might go under,” said Camilla Yanushevsky, an analyst at CFRA.

Many of the retailers that were still buying advertising space in women’s magazines are shifting to digital because that’s where people are spending their time — and their money.

Thomai Serdari, a strategist in luxury marketing and branding with the Stern School of Business at New York University, said the magazines have to change just like the industry they depend on.

“In the past, magazines were functioning, in essence, the way a fashion brand functions,” Serdari said.

Now with fewer fashion shows and more digital launches and reliance on social media personalities, a magazine that’s put to bed months in advance doesn’t make as much sense.

The way people buy magazines has changed, too. Lisa Pecot-Hebert, a journalism professor at the University of Southern California’s Annenberg School, said women’s titles depended on people picking up issues here and there, like before boarding a plane.

“Well, we’re not flying, so people aren’t in the airport buying magazines,” Pecot-Hebert said. “We certainly aren’t going to newsstands and just hanging out and looking at magazines to choose because of COVID-19. We aren’t even in spaces where we’re buying those magazines.”

And we’re not hanging out in doctors’ waiting rooms and salons, where we might flip through a copy that’s just sitting there.

The culture has changed, too, said Harriet Brown, a professor of magazine, news, and digital journalism at Syracuse University. Women’s magazines presented a narrow ideal of beauty.

“That’s a problem, and I’m not sure that audiences are really looking for that anymore,” she said.

Brown said she will miss some of the work these magazines have done, such as their pioneering work on women’s health.