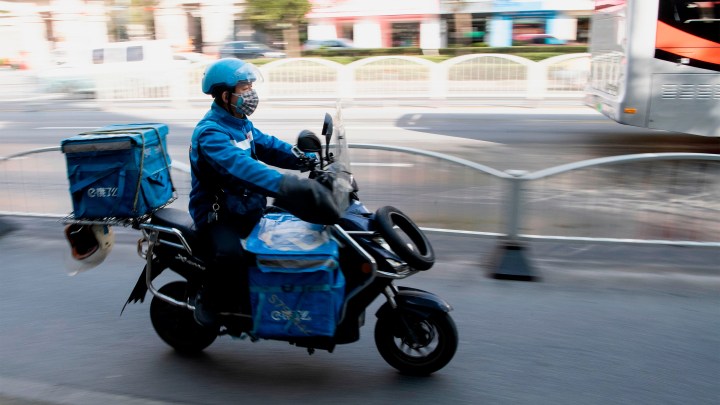 COPY
A food delivery worker drives along the streets of Shanghai. Chinese companies seem to have invested more in the logistics of app-based delivery than U.S. companies so far. Noel Celis/AFP via Getty Images

A food delivery worker drives along the streets of Shanghai. Chinese companies seem to have invested more in the logistics of app-based delivery than U.S. companies so far. Noel Celis/AFP via Getty Images
Listen Now

As the pandemic worsens, record numbers of Americans are avoiding the supermarket and ordering groceries online, pushing domestic sales to a record $7 billion in June, according to a Brick Meets Click/Mercatus survey.

The stakes are high, as e-commerce titans like Amazon Fresh and Uber Eats in the U.S. compete for global customers against the likes of Chinese behemoths Alibaba and Tencent.

“What we’re really seeing today is, there are about seven or eight global companies who are building mega-ecosystems that encompass every part of a person’s waking life,” said Michael Zakkour, international commerce and retail consultant at 5 New Digital. “Amazon, Alibaba, [Chinese retailer] JD, Tencent and to a certain degree Walmart and Target have all made food, beverage and grocery the tip of the spear for building out their ecosystems.”

Marketplace’s Jennifer Pak in Shanghai and Scott Tong in Washington each used digital apps to order two meals: one for groceries and one for food delivery.

Tong shopped for one of his (and his daughter Audrey’s) favorite meals: grilled codfish tacos. During the pandemic, Tong’s family has been shopping jointly with neighbor Lauren Eskovitz and her family. Together, they found American delivery apps like Amazon Fresh and Instacart overwhelmed and overloaded when the virus first came, so they ended up taking a risk and shopping in person.

“In the beginning, it was really, really difficult to even find a [time] slot to have groceries delivered,” Eskovitz said. “You’d go to Instacart or wherever you would go, and you’d put in all your stuff, go pick a time, and there’s, like, nothing for two weeks.”

The system adapted quickly, though, to massive demand in March, when the coronavirus began spreading in the United States. Instacart now delivers orders within hours, even as U.S. e-grocery sales have surged.

“We conducted our survey at the end of [March], and what we found was nearly a 2½-fold increase in the number of active households shopping online,” said David Bishop, partner at Brick Meets Click. “And that represents around 30% of all U.S. households. You can just see how rapidly it went up.”

“What we found was a nearly 2½-fold increase in … active households shopping online.”

So the Tong and Eskovitz families entered their joint order (codfish tacos and many other items, including chicken, steak, strawberries, limes, raspberries, Oreos) on Instacart, which promised delivery in two hours.

In Shanghai, it’s easier for Jennifer to find seafood live, so she will make lobster stir-fried with ginger and spring onion on a bed of noodles.

China’s e-grocery landscape is so sophisticated that there are apps focused just on “fresh” products like fruit, vegetables, meat, eggs, bakery goods and fish and shellfish.

That is because Chinese consumers usually prefer to buy groceries daily from their local food markets, where customers can choose their own fish and have it gutted or filleted and buy shrimp with the whiskers trimmed at no extra cost.

Tech giant Alibaba’s Hema app tries to replicate this shopping experience with a twist. It started in 2015 and, as of the first quarter of this year, has more than 220 supermarket stores in 23 cities across China. These stores boast water tanks filled with fish, clams and crabs. Customers can choose their own seafood online and have it delivered so they can cook and eat it. Or they can go in person to the supermarket, have it cooked there so they can eat it on the spot.

The Hema supermarkets also double as warehouses so that deliveries can be made in as fast as 30 minutes within a 2-mile radius.

Alibaba’s Hema faces many rivals, including Dmall, Dingdong Maicai, JD Daojia and MissFresh, which is backed by another Chinese tech giant, Tencent.

Collectively they accounted for an estimated 289 billion yuan ($41 billion) in 2019, according to the market research and consulting firm iResearch.

Add in traditional supermarkets that also do online deliveries, and the fresh products e-commerce sector could be worth almost double, to 545 billion yuan ($78 billion) said another Chinese research firm, Analysys.

When Pak orders a special on Alibaba’s Hema, Boston lobsters, it indicates they came from Canada and also offers recipe recommendations, like how to prepare a ginger and spring onion lobster stir-fry.

In America, delivery is not 30 minutes. And it is not free.

For Tong’s $140 tab, $18 was tacked on for the delivery fee, Instacart’s fee and the suggested tip for the Instacart shopper who pulled Tong’s items from a local grocery store and drove them over.

But first, there were texts and substitutions from his Instacart shopper, named Maria. The issue: Many items were unavailable. The messages looked like this:

One reason for the substitutions: At key nodes of America’s food supply chain, there aren’t enough healthy workers.

“In some parts of the country, we are on the heels of having to harvest crops,” said Sylvain Perrier, president and CEO of the online grocery consultancy Mercatus. “If you can’t get additional farm hands or you are dealing with an outbreak, it’s a significant issue.”

This is typically not a huge problem on Alibaba’s Hema. Companies like it invest a lot in warehouses close to customers and digital logistics to ensure their apps are up to date on what is in stock. This provides an advanced “last-mile network,” in the lingo of the delivery industry, that was tested and performed well during the peak days of China’s pandemic, according to Chengyi Lin, a France-based professor of strategy at the global business school INSEAD.

“The key word is ‘readiness,’ ” Lin said of China’s e-grocery sector. “The speed of digital transformation in retail is way ahead of the U.S.” In a recent survey of European executives, Lin found that about half of them believe China will lead the global e-commerce transformation.

When there is a delivery delay, like due to heavy rain, Alibaba’s Hema app will notify Pak, and she could track the delivery person’s whereabouts on a real-time map inside the app.

“Ordering groceries online is much more advanced in China than the U.S., and when I say ‘advanced,’ it’s market penetration. I’d say more than double the amount of groceries are ordered in China for delivery versus the U.S.,” said William Bao Bean, with the global venture capital firm SOSV in Shanghai.

According to iResearch, the customers it surveyed used grocery delivery services one to two times a week in 2019.

Sometimes the selection is better than in retail shops. JD.com, backed by Tencent, offers Oreos in flavors like cherry blossom matcha and white peach oolong tea.

Next challenge: restaurant food delivery, an estimated $33 billion market in the U.S. this year, according to Morgan Stanley. Given the pandemic, some analysts predict sales will double this year.

The thing is, even before the pandemic hit, China’s meal delivery sector was already estimated to be worth 654 billion yuan ($93 billion) or 14.2% of sales in restaurants in 2019, according to a joint study by Meituan-Dianping and China’s Hospitality Association.

These apps can even deliver hotpot — a meal customers cook themselves, putting meat and veggies in a pot of boiling broth at the dinner table. Which is what Pak chose to order.

If customers don’t have the equipment for hotpot, restaurant Haidilao offers a minipot plus fuel set for an extra $4.

It would be like ordering barbecue and getting a minigrill for customers to do it themselves.

Speaking of barbecue, that’s what Tong’s family ordered for this story, from the restaurant Federalist Pig. The app Postmates delivered, tacking on $20 in fees for a $64 order for a family of five.

It’s these fees that deter many American families, including the Tongs, from ordering in often.

However, according to Chinese research firm iiMedia, 85% of the people it surveyed in 2018 ordered food delivery at least once a week in China.

Delivery apps like Meituan-Dianping offer so many discounts, sometimes delivering food for free, that ordering in can sometimes be cheaper than cooking.

Take Liu Guangrong, a delivery man for the app Eleme (which in Chinese means “hungry yet?”). He drives a low-cost moped rather than a car. His earnings are far lower than peers in advanced economies. And Eleme’s AI technology schedules far more deliveries at a time than what transpires in most other countries.

“During the peak lunch hour, the app can send me up to 15 orders in one delivery run,” Liu said.

Deliveries are so cost-effective in China that Pak and her assistant, Charles Zhang, in Shanghai can tap out an order for just two cups of bubble tea. Specifically, a berry-yogurt-flavored bubble tea and a dragon fruit tea with coconut jelly on the Meituan-Dianping app came in under $5 total. The delivery fee was $0.40, but that part was waived by the app.

A quick tally of what it would cost to order one coffee in the U.S.: $4 for the coffee, $8 for delivery and tip. No way.

These differences matter, given that U.S. grocery and food apps are now competing against Chinese giants for customers in Latin America and India. This is a global food fight.

“When you look at India, they’re definitely going more towards the China model,” said Bao Bean, the venture capitalist in Shanghai. “Whereas the U.S., the big-box format, with large parking lots and everybody driving a car, you’re simply not going to see that in Southeast Asia and South Asia.”

He said Amazon is not doing as well in India compared to Chinese tech firms, and Chinese money is backing Indian startups. A report by the MacroPolo think tank found that Chinese apps overtook U.S. apps in 2019.

Though, Chinese apps are now caught in the political crossfire between China and India.

We end this story where it began: with Tong’s endless grocery order, which finally arrived at 8:30 pm. Among many Instacart substitutions, the small pack of chicken his neighbor Lauren Eskovitz ordered was, in her words, “replaced with 8,000 drumsticks.”

In the end, the Cajun codfish tacos turned out fabulous, accompanied by mango salsa, red cabbage and a proprietary aioli put together by daughter Audrey. On the side: corn on the cob and balsamic sauteed Brussels sprouts.

But that was after the grocery order took 2½ hours to arrive. In that time, Pak had already cooked and eaten the ginger spring onion lobster noodles.