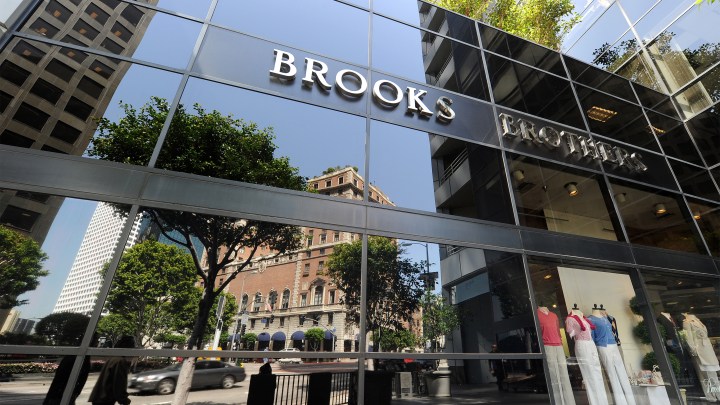 COPY
A Brooks Brothers store in downtown Los Angeles in 2010. Formal menswear was struggling before the pandemic. Robyn Beck/AFP via Getty Images
COVID-19

A Brooks Brothers store in downtown Los Angeles in 2010. Formal menswear was struggling before the pandemic. Robyn Beck/AFP via Getty Images
Listen Now

Lockdowns and working from home haven’t been great for the men’s formalwear industry. But coronavirus isn’t the only thing that Brooks Brothers has been dealing with. Its mainstay product — the suit — has been losing popularity for years.

Brooks Brothers opened its first store in lower Manhattan in 1818 when the U.S. was made up of 20 states. Future customer Abraham Lincoln was only 9 years old. When the suit as we know it today started becoming popular in the late 19th century, Brooks Brothers cashed in.

“They were right there at the heart of finance, at the heart of politics, really when America was getting its start,” said Susan Scafidi, founder of the Fashion Law Institute at Fordham Law School.

She said Brooks Brothers popularized suits that were ready to wear off the rack. That helped its suits fit more people. But Scafidi said it also made the suit, and the high status it represented, more accessible.

By the middle of the 20th century, Sacfidi said, the suit also became a symbol of corporate conformity. Think “Mad Men.”

But in the 1990s, casual Fridays had become a thing. Then, Silicon Valley decided hoodies and sneakers were OK, and casual became mainstream.

“I used to own Brooks Brothers suits back when I was starting my career, and I can’t remember the last time I did,” Schack said.

Since 2014, the market for men’s suits has shrunk by 11%, according to the research firm Euromonitor. And menswear has changed with the times.

But, Giddon said, the suit isn’t dead. The suits he sells tend to be fashionable suits meant for special events.

“It’s not really classic workwear,” Giddon said. “That’s not what the young guy is looking for in a suit.”

The COVID-19 pandemic has only made things worse for the suit industry, as people work from home and stores have closed. As Brooks Brothers files for bankruptcy, it says it’s seeking a buyer for the brand.