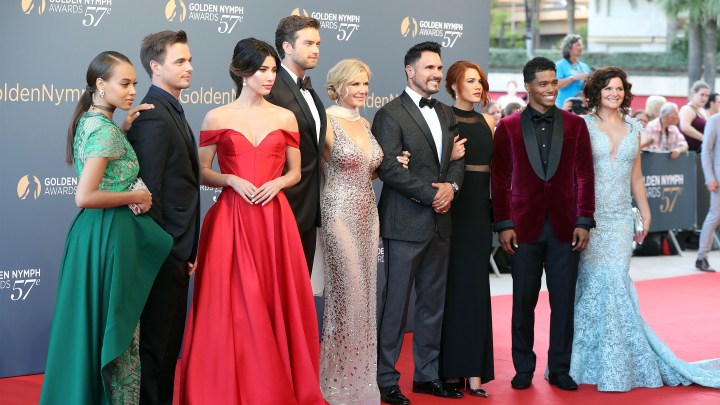 COPY
Cast members of "The Bold and the Beautiful" at the Monte-Carlo Television Festival in 2017. The soap opera will resume filming but keep the cast socially distanced. Valery Hache/AFP via Getty Images
COVID-19

Cast members of "The Bold and the Beautiful" at the Monte-Carlo Television Festival in 2017. The soap opera will resume filming but keep the cast socially distanced. Valery Hache/AFP via Getty Images
Listen Now

Last week, the state of California and Los Angeles County allowed filming for movies and television to resume.

And one of the first scripted dramas to turn on the cameras will be the CBS daytime soap opera “The Bold and the Beautiful.” There will be restrictions in place to minimize potential spread of coronavirus; that means a lot of stony, silent glares, secret lovers and social distancing.

Like most TV shows, “The Bold and the Beautiful” ended production in mid-March because of COVID-19. Now, it’s going to start taping again, but the steamy scenes the show is known for aren’t going to be happening.

Some actors might film intimate scenes with their real-life partners, and the show will be deploying old soap opera tricks, like panning to the fireplace during a romantic scene.

Duncan Crabtree-Ireland, the chief operating officer of the screen actors union SAG-AFTRA, said everyone wants to get back to work, but safely.

For weeks, he’s been discussing how to reopen with epidemiologists, including Ian Lipkin from Columbia University. Lipkin said the most important thing is going to be testing.

“If you tested people before they join the production, and you continue to test them once a week, you can dramatically reduce the risk,” he said.

“If somebody gets it wrong and there are some tragedies as part of the set, everybody will pay the price,” Fischhoff said.