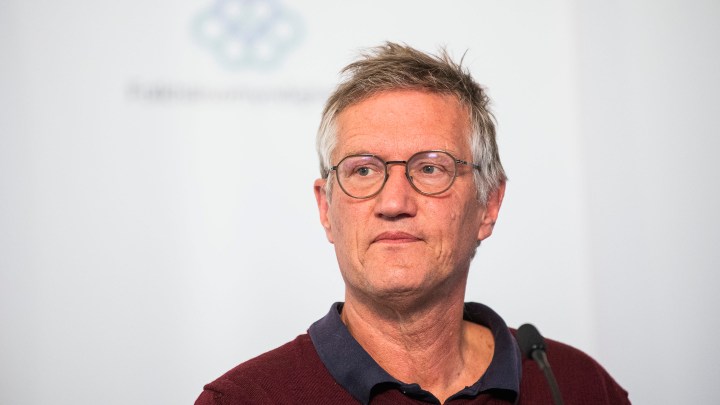 COPY
State epidemiologist Anders Tegnell of the Swedish Public Health Agency now says there was "potential for improvement" in the country's strategy to fight the pandemic. Jonathan Nackstrand/AFP via Getty Images
COVID-19

State epidemiologist Anders Tegnell of the Swedish Public Health Agency now says there was "potential for improvement" in the country's strategy to fight the pandemic. Jonathan Nackstrand/AFP via Getty Images
Listen Now

Sweden captured attention for its relaxed approach to containing the spread of COVID-19 this year.

Social distancing was encouraged, but shops and restaurants stayed open, those younger than 16 continued to go to school and borders stayed open to European visitors.

That helped the economy continue to grow in the first quarter, unlike many other nations. But, with some data showing Sweden had the highest per capita death rate in the world last week, the architect of the country’s strategy says it might have been a mistake.

Sweden’s state epidemiologist Anders Tegnell said there is “potential for improvement” in the government’s no-lockdown strategy, suggesting a more effective policy might have been somewhere between what Sweden opted for and the strict restrictions other nations imposed.

Tegnell’s comments are an about-face: For months, he’s insisted his nation’s approach was more sustainable.

It has so far prevented the country from suffering the kind of deep economic blow other nation’s felt — Sweden’s economy grew 0.4% in the first quarter from a year ago, while the eurozone (which Sweden is not part of) contracted more than 3%.

Still, Robert Bergqvist, chief economist at SEB, says Sweden’s economic trajectory can be impacted by a number of factors.

“Exit policies in other countries in Europe — we are very dependent on exports. It also depends on recovery strategy,” Bergqvist said.

He said despite Tegnell’s comments, prospects of a lockdown now in Sweden are uncertain, and though public finances are strong, new restrictions would come with a price tag the country likely couldn’t afford.