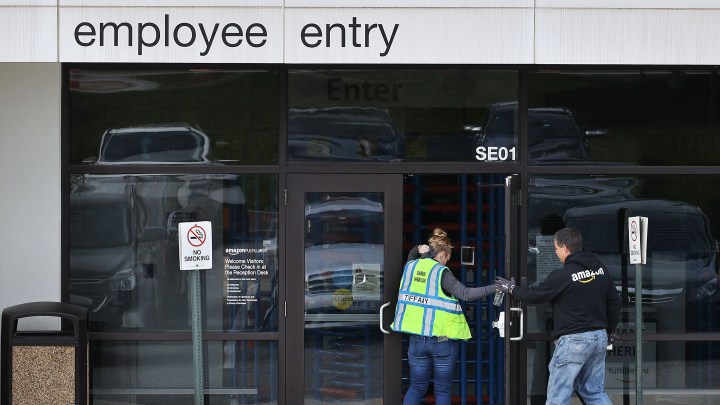 Amazon has hired more than 175,00 people during the pandemic. What's it like starting a new job there right now? Chip Somodevilla/Getty Images
COVID-19

Amazon has hired more than 175,00 people during the pandemic. What's it like starting a new job there right now? Chip Somodevilla/Getty Images

When it comes to job searching in the middle of the COVID-19 pandemic, Andrea Barringer has seen it all. She interviewed via Zoom for an opening at one company, and in person for another, where the prospective employers weren’t wearing masks. She got rejection letters from the retailer Target — three of them, to be exact — despite it being “one of the busiest places” in her area at the moment.

And, most importantly, after six weeks of searching, applying, interviewing and getting rejected, she was finally hired.

According to the Marketplace-Edison Research Poll from late April, nearly a quarter of Americans are not at all confident that they would find a new job within six months if they were to lose their current job. That has more than doubled from 11% in 2019.

And yet, job loss is an intense reality for many people in the U.S. right now, and finding a new source of income is urgent. Roughly 40 million Americans have now filed for jobless aid since the coronavirus forced millions of businesses to close their doors and shrink their workforces.

Those layoffs have forced some people to jump right back into the job market, sometimes outside of their preferred fields. Like Barringer, who lost her job as an office manager for a T-shirt company in Lawton, Oklahoma. She was looking for work everywhere from UPS to dental and CPA offices to a fast food chain.

“My basic background is customer service as a whole, so it was anything that had to deal with customers or working with people is what I was aiming for,” the 28-year-old said.

Barringer says many of her applications were met with responses about hiring freezes or already-filled positions. But for those jobs that were still open, she moved on to interviews. In three different interviews, she had three very different experiences.

“The one at the fast food place, no one was wearing a mask, I sat really close to all of them. It was very strange considering the times,” Barringer said of her interview for an assistant manager position. “I was confused that they even had an in-person interview.”

At the other end of the spectrum, with UPS, she had a phone interview and an interview over Zoom. “It felt pretty natural,” Barringer said. “It was a lot of smiling and nodding.”

Her third interview, with a veterinary clinic, featured an in-person interview, but at proper social distance, and everyone wore masks. In the end, that’s who offered her the job that she accepted. Just one week into the job, Barringer reported being very happy with where she landed.

“It ended up for me, again, very lucky, because that’s not the case for everybody,” she said.

For some, the COVID-19 pandemic has meant taking even riskier work after a job loss. As has been widely reported, there’s no shortage of jobs in certain retail sectors, as delivery services expand. Walmart has hired more than 235,000 workers. ZipRecruiter says searches for grocery positions have increased 22% since the start of the crisis. CVS said in late March it would hire 50,000 people to keep up with demand.

Taking one of these jobs, however, means taking the health risk that comes with working in a warehouse, store or other densely populated area.

That’s been the challenge for Avanne Foster, 31, in Phoenix. She lost her job building hot tubs and spas in part, she says, because she told her employer she would not be coming in over concerns about her asthma during the pandemic. The company maintains that she quit, and has since filled Foster’s position.

But she now works even closer to the frontlines, processing and transporting essential goods and food for a logistics company. She found the job on Craigslist.

“I’m still risking my life going in. If I catch it, that’s that,” she said of the coronavirus.

But Foster has had little choice. She says she’s broke, she hasn’t gotten a stimulus check yet and she hasn’t had any luck with filing for unemployment.

Another major player leading the hiring push is Amazon. It’s brought on more than 175,000 new employees during the pandemic. One of them is 26-year-old Stephen Proctor, who left his job as a server at a Texas Roadhouse restaurant near Dallas when it shifted to to-go service only. The pay was no longer sustainable for him at that point, and he found work at an Amazon fulfillment center.

Getting the job was as easy as filling out a virtual “online assessment” and picking a start date, Proctor says — no formal interview. And he estimates he’s now making almost triple what he made at the restaurant, as much as $1,500 a week, depending on how many overtime shifts he’s able to pick up.

He says the workload was “insane” when he first started because of how much people are shopping online. But the company has tried to retain workers with increased incentives. Since mid-March, Amazon has offered a $2 hourly raise for warehouse workers. The company is phasing that “hazard pay” out at the end of this month. Proctor says he has also gotten paid double his usual rate for overtime shifts.

But there’s the question of workplace safety.

“You have a ton of people at the factory, but at the same time, they have huge measures in place to make sure that you’re not next to anyone,” Proctor said. “They enforce the 6-feet rule like crazy.”

He says he feels safer at the Amazon fulfillment center than he would at his old restaurant, which has partially reopened and welcomes new guests through its doors every day.

Jenna West accepted her new job as a public relations manager for Workhuman, a human resources software company in early February. She was all set to start in the office on March 18.

“On the Friday before I started, I got a call, and [they] said, ‘Actually, no. Everybody’s working from home, you will be getting your computer mailed to you and everything’s going to be remote,’” West said.

It’s a particularly hard spot for West to be in because, working in communications, part of her job is getting to know the company and its employees and telling their stories. That’s hard to do when she has yet to meet any of her coworkers in person.

“I want to know people, I want to make those connections, I want to hear someone talking in the hallway about something cool they’re doing and be like, ‘Wait, tell me more about that.’ So that’s been the hardest thing about being remote, is that I’m not able to build those relationships as strongly as I could if I was in the office” West said.

That said, she’s grateful that Workhuman is keeping all of its employees’ health and safety in mind by keeping the office closed. And, her onboarding process was smooth: a full week of meetings and facetime with all of her new colleagues. And, for those that were onboarding at the same time she was, they formed a special kind of bond — more pronounced social connection that’s crucial in a world still defined by social distancing.

“I understand that those bonds are probably stronger in person, but, at the same time, we had this unique situation that bonded us in a way that not many people can say that they have,” West said.