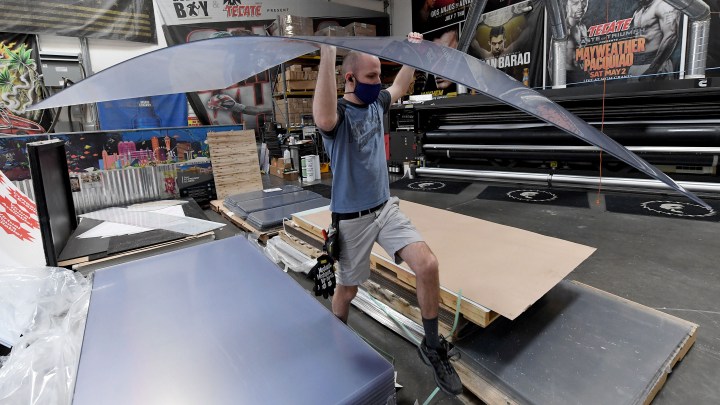 There have been some recent signs of slight economic improvement in May — now that states and businesses are tentatively reopening.

That reopening includes manufacturing, where, for example, auto plants have started ramping up production again. That comes along with new health monitoring and assembly-line precautions to keep workers safer.

The Federal Reserve Bank of Richmond’s manufacturing index for May rebounded from a record low, but it’s still at its lowest level since 2009.

Manufacturers of autos and aircraft, oil and gas producers have all been hit hard by plummeting business and consumer spending.

Even in sectors where demand is still high, like food processing, the coronavirus has infected workers and slowed production. Arun Sundaram at CFRA Research says some meatpacking plants shut down, retooled and reopened.

“Not to the full capacity pre-COVID-19,” Sundaram said. “There are still challenges keeping workers safe, social distancing within the plants.”

Increased automation and the use of more robots could be a solution to crowded, hands-on production lines.

But Ned Hill, at the Ohio Manufacturing Institute at Ohio State University, says in the near-term, don’t bet on it.

“I don’t expect to see lots of capital investment,” Hill said. “Companies right now are trying to pay attention to their burn rate on cash, to make sure they stay open.”