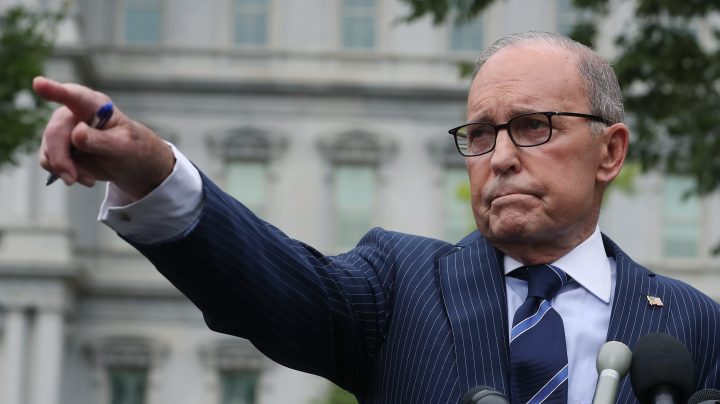 COPY
Several people in the Trump administration, including White House economic adviser Larry Kudlow, above, have said that there could be historic growth in the third quarter of this year. Mark Wilson/Getty Images
COVID-19

Several people in the Trump administration, including White House economic adviser Larry Kudlow, above, have said that there could be historic growth in the third quarter of this year. Mark Wilson/Getty Images
Listen Now

Speaking to Fox News on Tuesday morning, White House economic adviser Larry Kudlow said “the third quarter of this year could be the fastest-growing quarter in U.S. history.”

With retail sales down more than 16% last month, the unemployment rate up where it hasn’t been since the Great Depression, and so much uncertainty about what will happen as states reopen their economies, could that be true?

We called economist Megan Greene, a senior fellow at Harvard’s Kennedy School, to help us out.

“So I think that as the economy opens up, we should see the economic data improve,” Greene said. “Depending on how you’re looking at that data, it will either improve a little or it will improve a lot.”

Quarterly economic growth, the increase in gross domestic product, is typically expressed as a percentage. For example, the Congressional Budget Office predicts there could be a 5.4% increase in GDP in the third quarter of 2020. However, that will be a percentage increase from the second quarter of this year, which is widely expected to be one of the worst in U.S. history.

“The next quarter compared to this one will look really good because it’s compared to a really bad quarter,” Greene said. “What we need to do is compare where we are right now to where we were before this crisis even started.”

Click the audio player above to hear the full explanation.