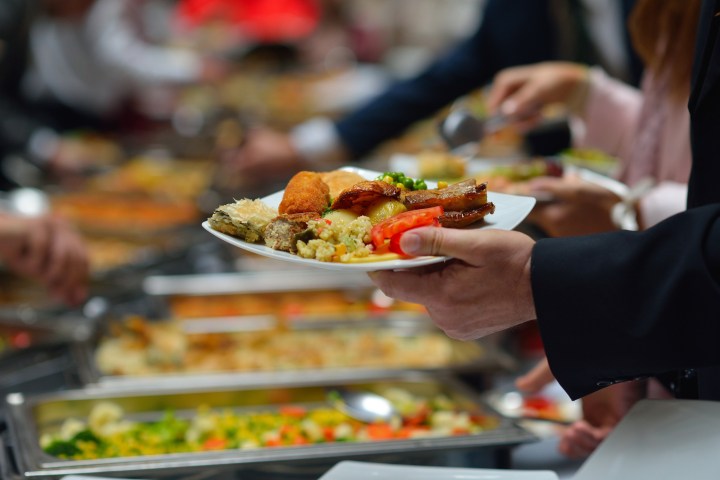 The way buffets operate may change permanently because of the COVID-19 crisis. .shock/Getty Images
COVID-19

The way buffets operate may change permanently because of the COVID-19 crisis. .shock/Getty Images

Sherry Buenrostro has operated La Nacional Mexican Buffet in Columbus, Georgia, along with her husband and parents-in-law, for nearly 20 years. But now the pandemic is forcing them to shift away from the buffet into a service model.

They’re redoing their menu, paying more staff to attend to customers, and trying to partner with delivery services to boost takeout sales.

“I think it’s a permanent change. I don’t know if anything will ever go back to what the norm was before,” Buenrostro said.

Buffets, like many other businesses throughout the U.S., have closed out of safety precautions, and may not be able to return once the COVID-19 crisis is over. Last week, the buffet chain Souplantation and Sweet Tomatoes announced all 97 of its restaurants are closing permanently.

The Food and Drug Administration has released a series of best practices for restaurants, which include discontinuing self-serving stations that require customers to use common utensils or dispensers, like salad bars and buffets. The state of Georgia has also asked restaurants that are reopening to do so. Guidelines like these are either pushing buffets to shut down entirely, like in Souplantation’s case, or at the very least, prompting both nationwide chains and local buffets to alter their business model and restaurant design.

The CEO of Global Franchise Group, Round Table Pizza’s parent company, told Marketplace that Round Table may discontinue its salad bar and pizza buffet permanently. While Round Table’s dining rooms have been closed during the crisis, it’s been able to maintain its sales through takeout and delivery, according to CEO Paul Damico. If that success continues, it will likely shutter its buffets at most restaurants.

But other major chains are still trying to preserve the options they’ve typically offered. In an emailed statement, Sizzler said that while its self-serving salad bar will not be available as it reopens dining rooms, it is exploring “a handful of scenarios” that would allow it to provide the items in their salad bar in line with local, state and national safety regulations.

Buffets, Inc. — which includes the chains Old Country Buffet, Hometown Buffet and Ryan’s — is also looking at new ways of operating, and may move towards one-on-one service, according to a spokesperson from Buffet’s parent company, Food Management Partners.

And in Las Vegas, which is known for its higher-end buffets, one resort is doling out a lot of money to ensure its survival. Eater reported that Bacchanal Buffet at Caesar’s Palace in Las Vegas (which cost $100 million to design) is allocating $2.4 million to remodel the area, with changes that will affect food counters and service equipment.

How buffets performed before the crisis

Darren Tristano, the CEO and founder of Food Service Results, said buffet restaurants had already been in decline for 20 years, driven by consumers’ change in taste for healthier options.

Ovation Brands, which used to operate Old Country Buffet and Hometown Buffet, filed for bankruptcy three times between 2008 and 2016. Food-poisoning cases have also affected the reputation of buffets, with Souplantation experiencing an E. Coli outbreak in 2007 and one Old Country Buffet diner getting infected with Salmonella in 2010.

While Tristano said this crisis doesn’t necessarily spell the end of the buffet as a concept, he foresees many of these restaurants closing. It’s not easy for them to just shift gears and operate like conventional restaurants or start making deliveries, especially during a pandemic (with Round Table Pizza being an exception).

Sherry Buenrostro from La Nacional Mexican Buffet knows that firsthand. Since the crisis began, Buenrostro said that sales have declined about 75%.

“I don’t know how long we will last because we’re very small,” she said.

Tristano noted that many buffet chains have tried to expand their business in the past by introducing takeout models, but experienced limited success.

“The competition for takeout and off-premise food is very high. Fast casuals not only do a very good job with high quality and healthier fare, but many of them, like Panera Bread, are offering drive-throughs and express pick-ups,” he said. “Buffets just aren’t designed to be convenient.”

On top of all that, Tristano said many buffets occupy spaces with a very large square footage, which means higher rent.

Alex Susskind, a professor of food and beverage management at Cornell University, said he does not think buffets can survive under the methods they used to operate under.

“It’s a design challenge for them to reinvent how they do things, and it may move away from the bulk production that they’re used to doing,” Susskind said.

There are also other operations outside of restaurants that rely on self-serving stations, which include grocery stores like Whole Foods.

Tristano said that prepared foods in the grocery store have had strong growth in competition to restaurants. Now he thinks we will see the removal of salad bars, and in place, prepared food that’s packaged and portioned.

Some businesses are getting creative in order to survive, with one St. Louis grocery store converting their salad bar into a mini-booze bottle buffet.

Why buffets are meaningful to a lot of Americans

While the buffet is mocked for purportedly having low-quality food choices, it’s a place that many have special memories of and will miss if it disappears.

For people like Sarah Chen Small, going to one was a way to mark a milestone in your life — maybe a birthday or a graduation.

“It sort of reminds me of how big of a deal Chinese banquets are,” said Small, who’s Chinese-American. “It’s the same idea: there’s all this food and it’s a big gathering.”

She said her family, including her grandparents, would pack themselves into a minivan and head off to a buffet together.

“I remember being in this really fancy, sort of posh buffet environment, and my sister and I standing there in front of the shrimp, loading our plates up,” Small said, laughing. “It was definitely a little déclassé and we loved it.”

Another fond memory: her grandma taking out some paper napkins and wrapping up a few dinner rolls to go. “My mom would be so mad at me telling this story, but I just think it’s so funny,” she said.

Anya Torres from Des Moines, Iowa, said some of the reasons she’s such a big fan of buffets are the price, variety and convenience. She and her best friend can take their young kids, who won’t fuss about the wait time compared to other restaurants.

“You just sit down and go get your food,” Torres said. “Everybody’s happy.”

Buffet owners like Sherry Buenostro view having one as a point of pride. “There’s nobody else in Columbus like us,” she said.

“I feel like just to still have a business to come back to, to still have my employees back with me — that definitely is a positive,” she said.