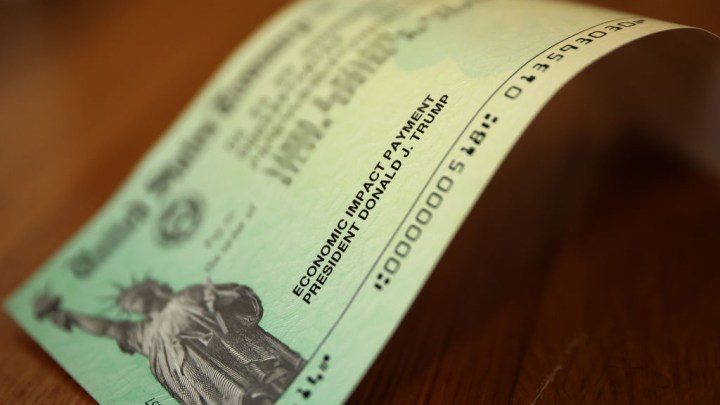 COPY
Some paper checks have already gone out, the IRS says, but others could take until June or July. Chip Somodevilla/Getty Images
COVID-19

Some paper checks have already gone out, the IRS says, but others could take until June or July. Chip Somodevilla/Getty Images
Listen Now

Wednesday at 12 p.m. ET is the deadline for taxpayers to provide their banking information to the IRS if they want to get their stimulus payments by direct deposit instead of a paper check.

The IRS has already disbursed 130 million payments totaling about $200 billion to taxpayers as of last week, which leaves about 20 million Americans still waiting.

Beverly Steward says it seems like everyone she knows has already seen that stimulus money hit their bank accounts. But when she logs on to the IRS portal to check on hers, “it says we have no information at this time.”

Steward, a therapy coordinator in Germantown, Maryland, has lost income due to the pandemic. She had enough savings to pay her bills this month, “but when June comes, if that stimulus does not come, I don’t know what I’m gonna do,” she said.

Steward just recently filed her taxes for the last couple years. So to be sure the IRS knows where to find her, she submitted her direct deposit information a couple different ways.

There are lots of reasons the IRS might not have a taxpayer’s bank data says Greg Geisler, a clinical professor of accounting at Indiana University’s Kelley School of Business. But the biggest reason?

“If they owed instead of getting a refund, the IRS does not have their bank account information,” Geisler said.

That’s the case for about 40 million Americans. Others might not have filed taxes at all, while some opt to get their tax refunds by mail.

The IRS says some stimulus checks have already gone out by snail mail, but others could take until June or July to arrive.

Pfizer said early data show its coronavirus vaccine is effective. So what’s next?

In the last few months, Pfizer and its partner BioNTech have shared other details of the process including trial blueprints, the breakdown of the subjects and ethnicities and whether they’re taking money from the government. They’re being especially transparent in order to try to temper public skepticism about this vaccine process. The next big test, said Jennifer Miller at the Yale School of Medicine, comes when drug companies release their data, “so that other scientists who the public trust can go in, replicate findings, and communicate them to the public. And hopefully build appropriate trust in a vaccine.”

How is President-elect Joe Biden planning to address the COVID-19 pandemic and the economic turmoil it’s created?

On Nov. 9, President-Elect Joe Biden announced three co-chairs of his new COVID-19 task force. But what kind of effect might this task force have during this transition time, before Biden takes office? “The transition team can do a lot to amplify and reinforce the messages of scientists and public health experts,” said Dr. Kelly Moore, associate director for the Immunization Action Coalition. Moore said Biden’s COVID task force can also “start talking to state leaders and other experts about exactly what they need to equip them to roll out the vaccines effectively.”

What does slower retail sales growth in October mean for the economy?

It is a truism that we repeat time and again at Marketplace: As goes the U.S. consumer, so goes the U.S. economy. And recently, we’ve been seeing plenty of signs of weakness in the consumer economy. Retail sales were up three-tenths of a percent in October, but the gain was weaker than expected and much weaker than September’s. John Leer, an economist at Morning Consult, said a lack of new fiscal stimulus from Congress is dampening consumers’ appetite to spend. So is the pandemic.