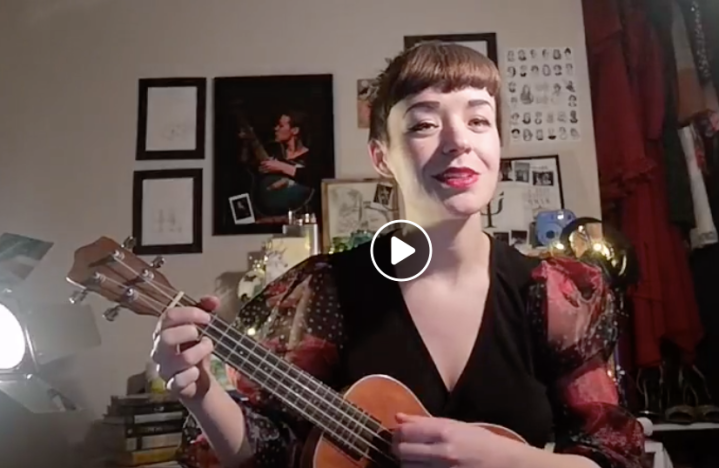 From Coachella to Glastonbury, scores of festivals have been postponed or canceled due to the COVID-19 pandemic. What do you do if you’re a musician who makes a living from touring?

Singer-songwriter Emma Langford is optimistic that many musicians are ready to face the challenge of working from home.

“For a lot of us, most of our income and most of our audience building happens when we’re touring live,” she said. “In a lot of ways, it’s nothing we’re not used to dealing with. My work life is really sporadic and unpredictable. I would spend a lot of time at home, doing project management and then I’d be out on the road, maybe three days of the week, doing shows live and doing weddings and various events.”

Still, the whole experience was a little unnerving.

“It’s a really weird thing to kind of come to terms with that not only can I not play gigs, but gigs do not exist,” Langford said. “So I’m figuring out ways to adapt to that and make gigs happen in my own way and entertain people and connect with my audience.”

The broadcast was free, but people watching could donate via a GoFundMe page. Tossing a few coins in a virtual hat for the musicians amounted to $1,600 dollars to be split between the performers.

Organizer Michael Grace spent the days before the festival making sure all the artists had proper lighting and a good camera angle. He was delighted with how people at home got involved.

The gigs reached a live audience of around 200 people with a further 4,000 watching on-demand streams afterwards. For some performers, that’s a considerably larger audience than at a cozy venue for 60 or 70 people.

That’s not the only change. It’s “really nerve-wracking” for Langford to sing her heart out to a camera in her living room when she’s “not getting the instant response of applause after a song,” she said.

Langford adds that many of the performers reported it “feeling like almost our first ever gig all over again because it’s such a different experience.”

Finishing the night by reading a bedtime story from Dr. Seuss, Langford says she’s interested in another online gig.

“I really enjoyed it, being able to just sit in the comfort of my own home,” she said.

With one gig down, a second Live at Home festival is scheduled this Thursday. It’s still free, though any donations received will go to a charity providing friendship and support to the elderly.