COPY
Pro-Trump extremists are joining smaller, private messaging groups on encrypted messaging apps. It might be a good thing, because then the virality of disinformation is contained, but it can also be a bad thing if law enforcement can't see their next move. Stan Honda/AFP via Getty Images
COVID-19

Pro-Trump extremists are joining smaller, private messaging groups on encrypted messaging apps. It might be a good thing, because then the virality of disinformation is contained, but it can also be a bad thing if law enforcement can't see their next move. Stan Honda/AFP via Getty Images
Listen Now

There is a lot of misinformation circulating when it comes to COVID-19. Fake cures. Conspiracy theories.

Twitter, YouTube and Facebook have stepped up their efforts to slow the spread of rumors by deleting false information. But Facebook’s WhatsApp — used by 2 billion people worldwide — is proving much more difficult to police.

A couple of weeks ago, WhatsApp launched an ad campaign on Brazilian TV. In it, two people who are rivals in public secretly connect over WhatsApp to help their neighborhood. The tag line is: “Fica so entre voces”: “It stays just between the two of you.”

This is WhatsApp’s selling point, that it’s private

“WhatsApp actually was one of the pioneers of what’s known as end-to-end encryption,” said Adrian Shahbaz, research director for technology and democracy at Freedom House. “WhatsApp cannot read any messages that are passed from person to person along its platform.”

Shahbaz said this is really important, especially in authoritarian countries. While WhatsApp is more popular outside the U.S., it’s commonly used by immigrant communities here. It’s a cliché: If you have aunties and uncles from India, Venezuela or Nigeria, your family WhatsApp group will bombard you with news stories, jokes and advice.

During this pandemic, it also means receiving messages like the one Rafael Tablado, from Tijuana, recently got, instructing him not to drink anything cold. Only hot beverages.

“The virus would get sent down to the stomach, and be destroyed,” Tablado said. That was just the beginning. Soon friends and family were sending him messages about how Egypt found a cure.

Just to be clear, none of those are true. The conspiracy theories have gotten so bad that Ireland’s prime minister asked WhatsApp users to stop sharing unverified information.

“In Twitter, in Facebook, in Google, in other social media that are not encrypted, there are tools that let us fact checkers know what is going viral, what is trending, so we can see if there is bad information or some hoax that needs to be debunked,” Tardáguila said.

WhatsApp has started promoting the International Fact-Checking Network to desktop users. The hope is when people get a message, they’ll send it for confirmation. Tardáguila said she’d also like to see it just get harder to forward messages. 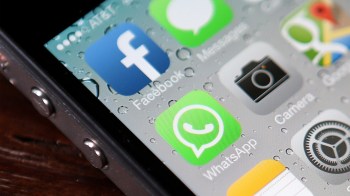