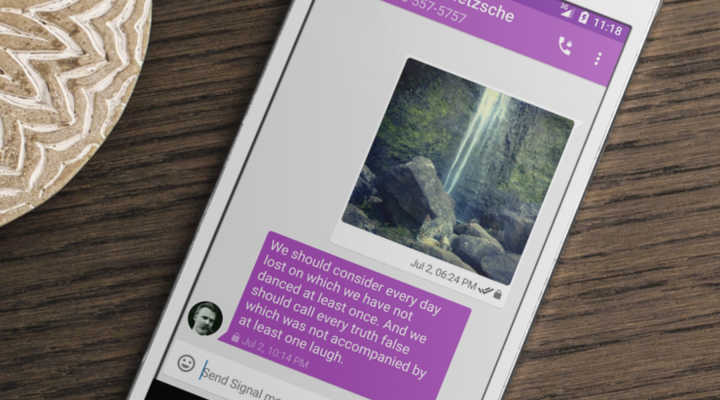 COPY
Signal uses end-to-end encryption so that no one can read your messages. Open Whisper Systems

Signal uses end-to-end encryption so that no one can read your messages. Open Whisper Systems
Listen Now

The encrypted messaging app Signal has seen a 400 percent increase in growth since the election of Donald Trump last week.

“We’ve never really seen any single event in the past that’s resulted in this kind of sustained, day-over-day, interest,” said Moxie Marlinspike, co-founder of Open Whisper Systems, which produces Signal.

Signal uses end-to-end encryption, so that no one — not even the people at Signal — can read the messages you send to others.  It’s not the only encrypted app that’s seen an uptick in use — another messaging app, Wickr, also told us they have also seen a noticeable increase in downloads.

Marlinspike said that the growth has to do with people seeking a safe haven.

“Donald Trump is about to be in control of the least accountable surveillance apparatus in the history of the world. That’s something that’s been expanding under Obama, and I think people were comfortable with that in the sense that they trusted his personal judgment. I think people are less comfortable with how Donald Trump is going to use that.”

Apps like Signal have been criticized for preventing law enforcement from seeing the communication of criminals — for example, ISIS is known to use Signal. Marlinspike says those groups would be able to get access to encryption tools anyway.

Some governments have taken steps to block encryption tools — for example, the government of Brazil has attempted (unsuccessfully) to block the encrypted messaging service WhatsApp. Marlinspike said this is something everyone will need to pay attention to.

“Every time they try to block WhatsApp in Brazil, there are riots.  So I think the popularity and ubiquity of a lot of these tools are going to prevent those kinds of measures.  But we’ll see.”

Listen to the full interview with Moxie Marlinspike above.