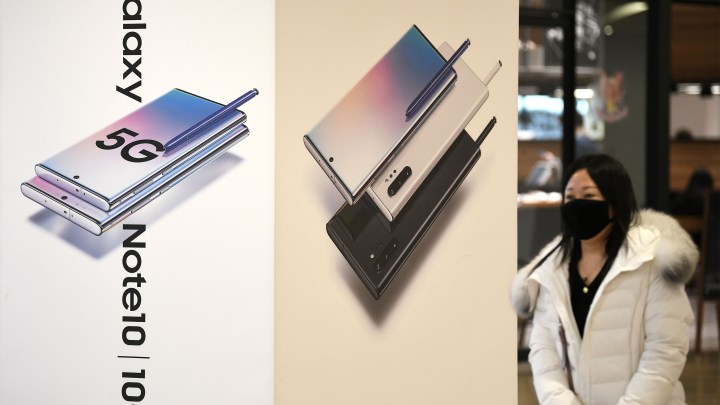 COPY
Samsung has said its output will be stalled from supply chain problems. Above, a woman wearing a face mask walks past an ad for the Samsung Galaxy Note10 in Seoul on Jan. 30. Jung Yeon-Je/AFP via Getty Images
COVID-19

Samsung has said its output will be stalled from supply chain problems. Above, a woman wearing a face mask walks past an ad for the Samsung Galaxy Note10 in Seoul on Jan. 30. Jung Yeon-Je/AFP via Getty Images
Listen Now

The manufacturing fallout from COVID-19, the expanding coronavirus disease, continues. Microsoft, which makes software installed in computers made in China, warned its sales will fall. And large manufacturers in Korea, including Samsung, now say their supply chain problems will stall output, too.

At issue here is a global manufacturing model that focuses on low costs and lean inventory at every step in the chain, a model where all the parts arrive at the plant just in time.

The just-in-time model comes from Toyota, which in the ’70s started having car parts arrive at the plant at the moment of assembly.

“You try to organize your delivery of them, just as you need them,” said Adam Slater, lead economist with Oxford Economics. “The final product goes out, and then you get a new set of inputs coming in, just as they’re needed for the next product to go out.”

Thing is, the quest for leanness and cost-cutting led many companies to put all their eggs in one supplier, in one country. And they got burned when some disaster hit — earthquake, terror attack, pandemic, whatever.

“Back then, something went wrong, Toyota went down,” said Barry Lynn, executive director of the Open Markets Institute, which does research on markets and monopolies. “But every other company continued to manufacture cars. Today if that happens, if one of those suppliers goes down, all the manufacturing companies go down.”

That happened in the car business nine years ago, when the tsunami hit Japan. Now it’s electronics, and the virus from China.

“Purchasing managers are intensely measured on how low their costs are. So that doesn’t leave a lot of room to spend extra money because there might be some contingency in which everything falls apart,” Helper said.

This time around, she thinks the pain of overreliance on Chinese suppliers could speed up change to make supply chains more visible and bring back some redundancies and slack that the just-in-time model shaved away a generation ago.