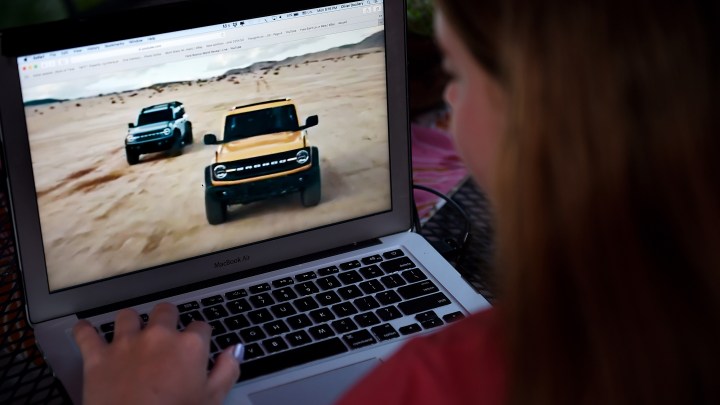 COPY
Ford has a lot riding on the new Bronco, which was taken off the market in 1996, Below, a person watches the premiere of the 2021 Ford Bronco on a computer. Olivier Douliery/AFP via Getty Images

Ford has a lot riding on the new Bronco, which was taken off the market in 1996, Below, a person watches the premiere of the 2021 Ford Bronco on a computer. Olivier Douliery/AFP via Getty Images
Listen Now

The highly awaited deliveries of the reborn Ford Bronco — returning after 25 years off the market — will be pushed back due to supplier delays, Ford said. One company executive blamed a single supplier based in Europe.

And like a puzzle, one missing piece ruins everything.

“All-new Bronco two-door and four-door customer deliveries will begin in the summer, rather than the spring, due to COVID-related challenges suppliers are experiencing (we are not naming the suppliers),” Ford spokesperson Daniel Barbossa wrote in an email,

Ford has a lot riding on the new Bronco, which was taken off the market in 1996, two years after a white Bronco played a starring role in an infamous slow-speed car chase involving superstar suspect O.J. Simpson. The rugged SUV is designed to take on Jeep’s profitable Wrangler model, once the missing pieces to Ford’s assembly chain arrive.

“Our understanding is that it’s related to the top,” Joseph McCabe, president of the data firm AutoForecast Solutions, said.

The removable top of the Bronco requires special manufacturing machinery known as tooling. McCabe said that hardware, and the people to run and test it, are in short supply.

“Logistically, the manufacture of the tooling, combined with actually making the part, to make sure everything is properly tested, getting the part from Point A to Point B,” McCabe said. “It’s that entire piece.”

Much of the global auto industry is nursing the same supply chain headache.

“This is a microcosm of the industry,” Michelle Krebs, executive analyst at Autotrader, said. “Since the pandemic there have been supply chain hiccups, especially out of Mexico, but also out of China and Europe, and even here in the U.S. So we have seen products delayed. For instance, the Chevrolet Corvette plant has had to stop production a couple of times.”

Several factors are in play here: disease outbreaks at key supply chain spots, government lockdowns of factories and transport delays. All are connected to not having enough people — engineers, line workers and truck drivers.

“With child care and school from home and other things, along with fear of illness and caring for people, have prevented people from coming back to work,” Robey said.

Delays cost money, though McCabe at AutoForecast Solutions said most costs get absorbed by suppliers rather than customers. He said auto companies are working to shorten supply chains to reduce their risk in the future, but the first order of business is to survive.