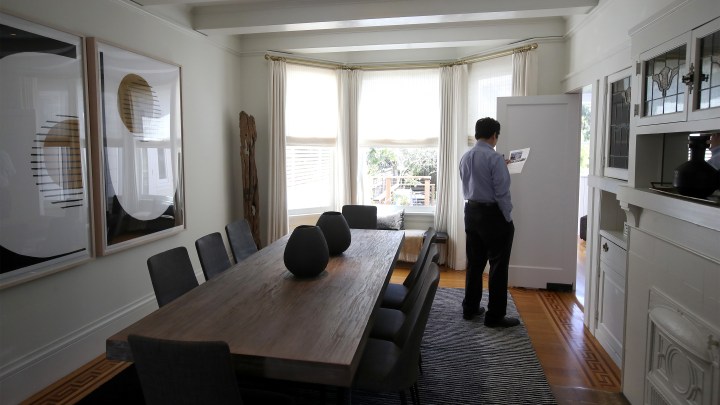 COPY
Buying a house in the Bay Area of California has become out of reach for a lot of families. Justin Sullivan/Getty Images

Buying a house in the Bay Area of California has become out of reach for a lot of families. Justin Sullivan/Getty Images
Listen Now

Vincent Lopez and his wife are public school teachers in Menlo Park, California, where homeownership can feel like an impossibility. They’ve each been teaching at least a dozen years and they make good salaries — more than $200,000 combined. But in the Bay Area?

“Your average three-bed, two-bath house is easily $1 million,” Lopez said. “A million is the starting point.”

They managed to save up about $100,000, half what they’d need for the standard 20% down payment. That’s where a startup called Landed came in. The company matched their savings and last year the Lopezes bought a modest house just 15 minutes from their school.

“We could have probably bought a home without Landed, far, far away from where we work, but that just wasn’t something that we were willing to compromise on,” he said, especially with three young kids at home.

The Lopezes are among more than 300 teachers that Landed — which describes itself as focused on “essential professionals, starting with educators” — has helped buy homes.

When they sell their house or want out of the partnership, they’ll need to pay Landed back the $100,000, plus 25% of any appreciation.

“If the home’s value goes down, Landed will share in 25% of that loss,” co-founder Alex Lofton explained, meaning the couple would deduct a quarter of the loss from what they owe the company.

Since it started in 2015, Landed has expanded to Denver, Honolulu, San Diego, Seattle and, recently, Washington, D.C. — all markets where essential workers struggle to afford local housing, and where prices are expected to keep rising.

If teachers live in the communities where they teach, “they’re then more available for parent teacher conferences, to work after school, to be there when school starts,” said John Falcicchio, D.C.’s deputy mayor for planning and economic development.

“They work long hours as it is,” he said. “What we don’t want to do is, on the front part of that day and the latter part of that day, [to] add a commute that can be over an hour for some.”

Most teachers would be better off with a government-backed loan that requires a much smaller down payment, according to Laurie Goodman of the Urban Institute’s Housing Finance Policy Center. Federal Housing Authority loans cap out at about $765,000, though, which isn’t enough for expensive markets like California’s Menlo Park.

In those places, Goodman said, “retaining 75% of the wealth you build though your home equity is a hell of a lot better than retaining 0%.”

For Vincent Lopez, it was either jump now and give up some equity, or spend another six years saving.

“And guess what, six years comes and goes and instead of needing to save that extra $100,000, we need to now save an extra $150,000 because home values are 20% more,” he said. “We were worried about always chasing this moving target.”