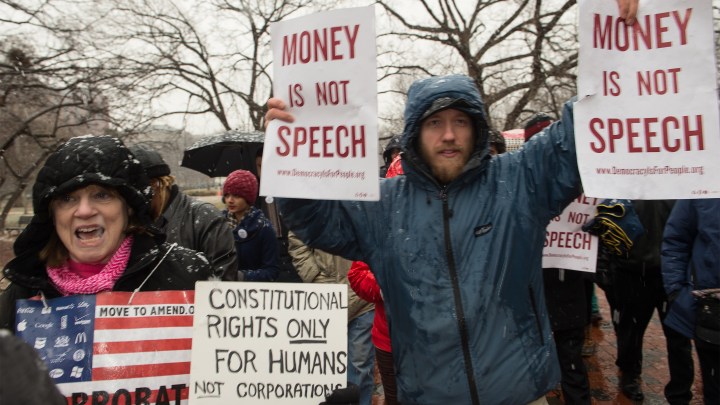 COPY
Demonstrators march in the snow in 2015 through Lafayette Park, outside the White House, to rally against the Supreme Court's decision in favor of Citizens United. Nicholas Kamm/AFP via Getty Images

Demonstrators march in the snow in 2015 through Lafayette Park, outside the White House, to rally against the Supreme Court's decision in favor of Citizens United. Nicholas Kamm/AFP via Getty Images
Listen Now

It’s been 10 years since a watershed moment in American politics. On Jan. 21, 2010, the Supreme Court ruled that when it comes to spending cash in elections, corporations are effectively the same as people.

Since then, spending on elections has skyrocketed, and the 2020 campaign is set to be the most expensive yet.

Citizens United was technically about whether a private company could advertise a movie opposing Hillary Clinton. It was really about who was allowed to spend money in politics, and the Supreme Court decided just about anyone can.

Attorney Cleta Mitchell at the firm Foley and Lardner works with Republicans on campaign finance issues. She said Citizens United was a win for political speech.

“Now, a million citizens giving $1 to an organization that’s incorporated have the same rights as an individual as long as it’s independent of the campaigns and the candidates,” Mitchell said.

Citizens United was followed by other legal decisions and regulatory rollbacks that lifted contribution limits and helped fuel the rise of the PACs and Super PACs that are the big spenders in elections today. It also fueled a backlash.

That opposition was kicked off by then-President Barack Obama, who chastised the Supreme Court during his State of the Union address.

“Last week, the Supreme Court reversed a century of law that I believe will open the floodgates to special interests, including foreign corporations, to spend without limit in our elections,” Obama said at the time.

That’s kind of what happened, according to Tiffany Muller, who runs the group End Citizens United.

“As a matter of fact, I think it came true even more than we could have expected,” Muller said. “The special interests have been empowered. They’re spending more than ever.”

Outside spending — money not coming directly from a campaign — went from $750 million in the 20 years before the case to $4.5 billion in the decade since, according to the Center for Responsive Politics.

“Most of the outside spending was favoring Republicans in the earlier period after Citizens United,” said Robert Weissman, president of the advocacy group Public Citizen. “It has now in the last few years been more equalized.”

Weissman said it’s not just that outside spending is at a record high. It’s also more concentrated, with just 25 people responsible for about half of the money going into big-spending Super PACs.