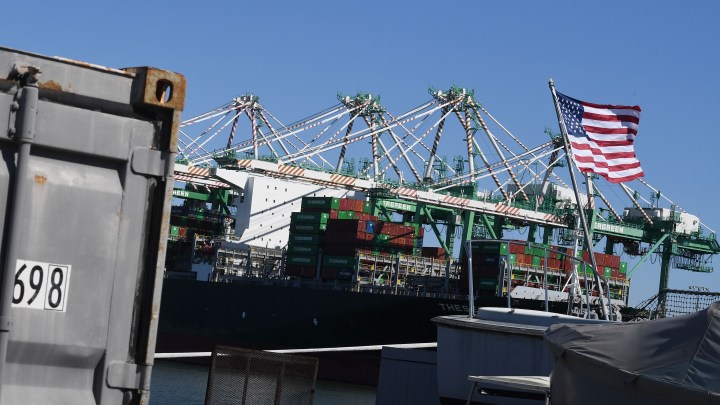 COPY
Shipping containers from China and other nations are unloaded at the Long Beach Port in Los Angeles in February. Mark Ralston/AFP via Getty Images

Shipping containers from China and other nations are unloaded at the Long Beach Port in Los Angeles in February. Mark Ralston/AFP via Getty Images
Listen Now

The U.S. trade deficit in goods (as opposed to services) shrank for the third straight month in November to the lowest level in three years.

Imports fell because businesses are uncertain, according to Bill Watson at the think tank R Street Institute. Phase one of the U.S.-China trade deal isn’t in the books yet. So, he said, “what we see here is potentially American importers responding to the trade war by decreasing the amount of business that they’re doing.”

Watson said businesses haven’t seen the fine print of any of the pending trade deals the White House is trying to get done in the new year. But if and when they do, “hopefully, we’ll see less of that as importers have a clearer picture of what it is that they’ll be able to import and from where and what price.”

U.S. buyers might have been anticipating that tariffs would roll back on products they were looking to import from China, Watson said. But only a few were spared a tariff increase earlier this month, including cellphones, laptops and video game consoles.

And ever since the trade war with China began, U.S. importers have been putting a lot of effort into finding other duty-free sources for their supply chains, instead of focusing on business as usual, he said.

That “reduces productivity and has major downstream effects that we may not see right away but will certainly develop over time, especially if the trade uncertainty continues and compounds,” Watson said.

This month’s goods trade numbers show that clouds are gathering on the global economic horizon, according to Robert Scott at the Economic Policy Institute.

“Some slight reduction in the trade deficit is a reflection of the fact that the economy is not growing as fast as it was in 2018 or earlier in 2019,” he said.

The Commerce Department will release full international trade data next week, including for services, where the United States normally runs a surplus.