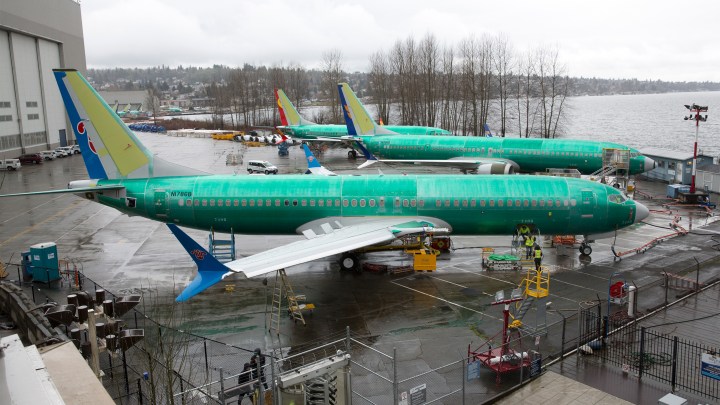 COPY
Boeing 737 Max 8 during the manufacturing process at the Boeing Renton Factory in Renton, Washington in March 2019. Jason Redmond/AFP via Getty Images

Boeing 737 Max 8 during the manufacturing process at the Boeing Renton Factory in Renton, Washington in March 2019. Jason Redmond/AFP via Getty Images
Listen Now

Boeing’s production halt has several analysts predicting that overall U.S. GDP growth could take a hit in the first quarter of 2020. The hit could range anywhere from 0.3% to a full percentage point, depending on who you ask.

While Boeing had already been cutting back on 737 Max production, its growing stockpile of roughly 400 undelivered 737 Max planes had been a positive boost to GDP growth, said Tim Quinlan, senior economist at Wells Fargo.

“When they just simply stop making them, well, that inventory boost goes away,” Quinlan said. “Without that boost, growth is now lower in the first quarter.”

Quinlan estimates that the production halt could lower overall GDP growth by 0.5%. That’s a small fraction of the overall U.S. economy.

Still, Wilmington Trust chief economist Luke Tilley said it’s hard to imagine any other company having such an impact on growth.

“Boeing is incredibly large, it has a lot of employees,” Tilley said. “And the scale of the cutback here would be in the billions of dollars.”

Boeing said the production halt is temporary, and that it doesn’t plan on laying off or furloughing the thousands of workers working on the 737 Max assembly lines.

Those are workers with valuable skills Boeing doesn’t want to lose, said Tom Derry, chief executive of the Institute for Supply Management.

“Hanging on to the skilled workforce that they have is a key strategic imperative for Boeing,” Derry said.

But if Boeing’s production halt drags on, analysts say furloughs and layoffs could be harder to avoid.

While layoffs and furloughs would initially impact paychecks, the effect would eventually start to pass through to the various suppliers, and other industries that service those workers, Quinlan said.