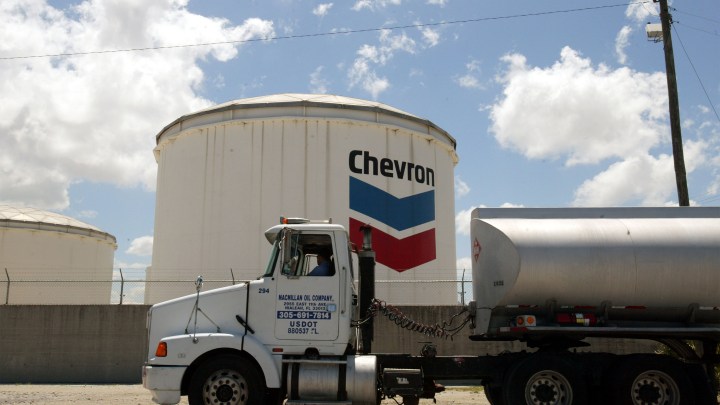 COPY
Chevron noted challenges in natural gas fields in the Marcellus Shale formation and in deepwater oilfields in the Gulf of Mexico. Joe Raedle/Getty Images

Chevron noted challenges in natural gas fields in the Marcellus Shale formation and in deepwater oilfields in the Gulf of Mexico. Joe Raedle/Getty Images
Listen Now

Chevron wrote down the value of its oil and gas assets by up to $11 billion Tuesday. Even for an oil company, that’s real money and a sign that oil and natural gas prices may stay somewhat low for a while.

The company specifically noted challenges in two investment areas: natural gas fields in the eastern United States, known as the Marcellus Shale formation, and deepwater oilfields in the Gulf of Mexico.

“Chevron bought into the Marcellus and paid a number of billions of dollars for that,” economics professor Ed Hirs at the University of Houston said. “Unfortunately, lots of people have been doing the same. And so the supply has outstripped the demand.”

Write-downs have occurred recently in several companies in the oil-drilling sector, including BP, Schlumberger and Repsol. The adjusted valuations reflect long-term risk in the oil industry: that as the world seeks to move on from fossil fuels, buyers of crude may not necessarily be there.

“[Oil demand] is already declining in Europe,” said Amy Myers Jaffe, fellow at the Council on Foreign Relations. “And now it’s looking more likely that it could peak in China.”

The write-downs, Jaffe said, upend a long-term assumption in the oil and gas business. The conventional wisdom used to be that a company could always wait out low prices until they recovered. The longer fossil fuels stay in the ground, the reasoning went, the more scarce the resource becomes and thus more valuable. But now, energy in the ground may never be produced as demand falls away in future decades.

“There are going to be oil and gas reserves that just can’t be produced,” Jaffe said. “And part of that pressure is climate change. And part of that has to do with new innovative technologies that will reduce the need for oil.”