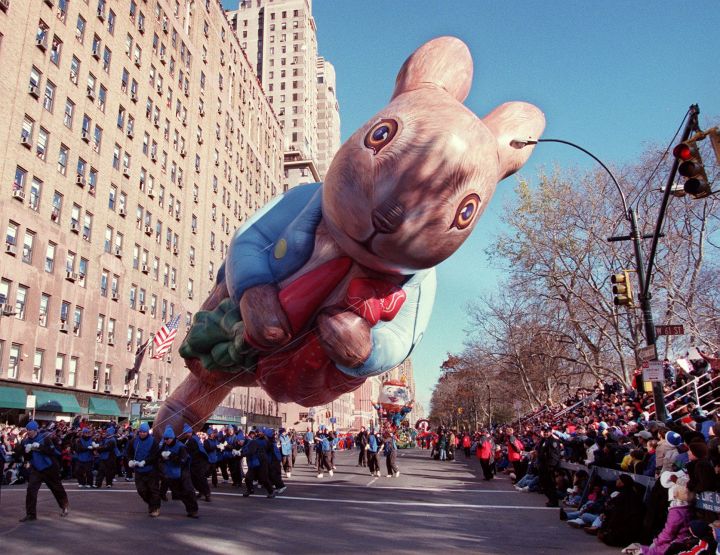 A giant Peter Rabbit balloon at the Macy's Thanksgiving Day Parade. Jon Levy/AFP via Getty Images
Brought to You By

For millions of Americans, the fourth Thursday in November starts the same way: in front of the TV. This year, Macy’s expects about 50 million people to tune in to watch its Thanksgiving Day Parade. Another 3.5 million people are expected to line New York City streets and watch the giant balloons make their way downtown in person.

This will be Macy’s 93rd annual parade.

“What’s really great about the parade is that it started in 1924,” said Susan Tercero, the executive producer for the Macy’s Thanksgiving Day Parade. “It was started by the Macy’s employees and it continues to be run by Macy’s employees to this day. The way that it started is that there were a lot of folks who worked for Macy’s who were immigrants from Europe and when they got to the holiday season, a lot of them came together and approached leadership and said that they really wanted to celebrate the holidays in a way that was more in fashion with what they had done over in Europe, which were these holiday parades. Of course, Macy’s said sure.”

Despite being held on Thanksgiving, the first parade was advertised as the “Big Christmas Parade!” It was meant to welcome Santa Claus to New York. In addition to floats, the parade featured a number of animals that were on loan from the Central Park Zoo.

“Three years in, in 1927, is when they decided that the animals were kind of scaring the children and they needed something new to try and still be exciting for everybody but less scary,” Tercero said. As a result, Macy’s hired Tony Sarg — who previously designed the holiday window displays for the stores — to come up with a new attraction. That was the first parade to feature the now iconic giant balloons.

Over the years, the parade hit a number of milestones — all of which were documented by Robert M. Grippo and Christopher Hoskins in their book “Macy’s Thanksgiving Day Parade.” Among them were the following:

1932: The last year for flying balloons

By now it was a tradition to release the balloons into the sky at the end of each parade. Macy’s would then offer a reward for each balloon that was returned. A year before, in 1931, Clarence Chamberlin was flying his plane when he saw another vessel enjoying the friendly skies: Felix the Cat. Chamberlin managed to capture the balloon with his plane and guide it to a field in Jamaica Bay.

Annette Gibson and her flying instructor, Hugh Copeland, weren’t as lucky. According to the book, when Gibson spotted a Tom-Cat balloon flying nearby, she flew their small biplane straight at it. The balloon wrapped itself around the left wing causing the plane to go into a tailspin. Pushing Gibson out of the way, Copeland regained control of the plane and got them back to safety. That year, Macy’s made the decision to no longer release the balloons.

1935: The end of the Christmas Parade

This was the first year that the parade was officially advertised as the “Big Macy’s Thanksgiving Day Parade.”

“The First Thanksgiving Day Parade to be TELEVISED. NBC will put it on the short waves from 12 Noon to 1PM,” read the parade ads that year, according to Grippo and Hoskins. People at home had a prime viewing spot as the camera was placed at Central Park West, just above the Museum of Natural History.

In 1942, Macy’s ran an ad announcing that its parade had been canceled. The ad featured a handful of balloons and a heading that read: “We’ve enlisted.” The parade returned in November 1945, after World War II ended.

If it wasn’t well known before, the parade was thrust into the national spotlight in 1947 when the movie “Miracle on 34th Street” was released. In it, Kriss Kringle steps in to save the parade when its original Santa Claus is too drunk to carry out his duties. The movie won three Oscars and two Golden Globes.

The parade has remained in the spotlight ever since. Becoming a national tradition, the parade has been able to draw top talent and in recent years has included performances by celebrities like Kelly Clarkson, the Jonas Brothers, Ariana Grande and Taylor Swift.

Grippo attributes another big transformation in the parade’s history to one of Tercero’s predecessors: Jean McFaddin.

“She got a lot of the talent to come in, but in a way, she also created a monster. What do I mean? She was the one that brought in the sponsorship. Everything is sponsored now. Every balloon is sponsored. Every float is sponsored,” he told Marketplace.

However, Macy’s employees remain the heart of the parade.

“What you see today is just an evolution of what it was from that first parade, but there are still some things that are really important to that first parade. One of them is that this is a parade that’s run by Macy’s employees,” Tercero said.

According to the company’s press release, there will be more than 8,000 volunteers at this year’s parade. Macy’s employees can sponsor friends and relatives to volunteer in the parade with them, Tercero explained.

“We try to have everyone signed up by Oct. 1 so that we can get costumes situated, get assignments done,” Tercero said.

Because it takes about 18 months to plan each parade, Tercero’s team is usually working on planning two Thanksgiving parades at once.

“We’re already in the thick of this year’s parade right now because it’s coming up, but we’re also already planning next year’s parade,” she told Marketplace in October.