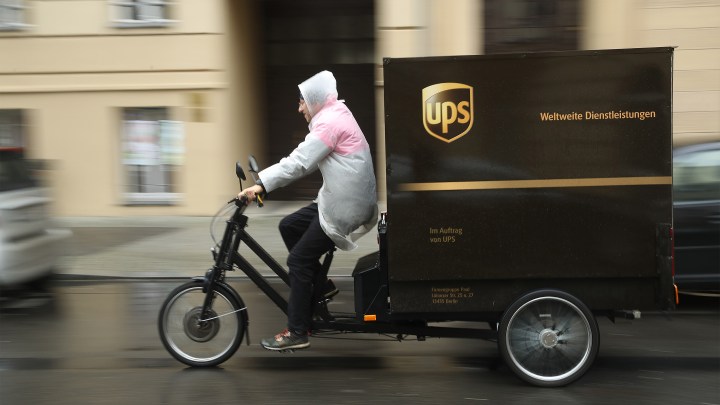 COPY
A driver cycles on a tricycle delivery vehicle to deliver packages for UPS in the rain in 2018 in Berlin, Germany. Sean Gallup/Getty Images

A driver cycles on a tricycle delivery vehicle to deliver packages for UPS in the rain in 2018 in Berlin, Germany. Sean Gallup/Getty Images
Listen Now

Most delivery trucks make dozens of quick stops every day, leading to congestion, air pollution and traffic delays. Much of this comes from the last mile of a package’s journey, especially in an era of next and even same-day delivery.

“Marketplace” host Kai Ryssdal discussed cities’ efforts to alleviate problems caused by truck deliveries with Tracey Lindeman, the writer of a recent article on the subject in The Guardian

“Trucks are a big source of emissions for sure,” she said. “But they also cause a lot of traffic problems. They’re dangerous for cyclists.”

When a package is headed to a city, it is usually dropped off at a big, suburban warehouse. Then a truck driver brings it from the warehouse to the customer’s doorstep.

Cities like Montreal are testing out a new way of doing things. As part of a pilot program, they’ve created several miniature distribution centers within the city where couriers on electric-assist cargo bikes come to deliver the packages.

“It’s an electric assist bike, so he [the courier] isn’t solely responsible for carrying around 400 pounds of cargo,” Lindeman said.

Such eco-friendly delivery programs also exist in Berlin, Germany and Oslo, Norway. According to Lindeman, New York is looking into doing something similar.