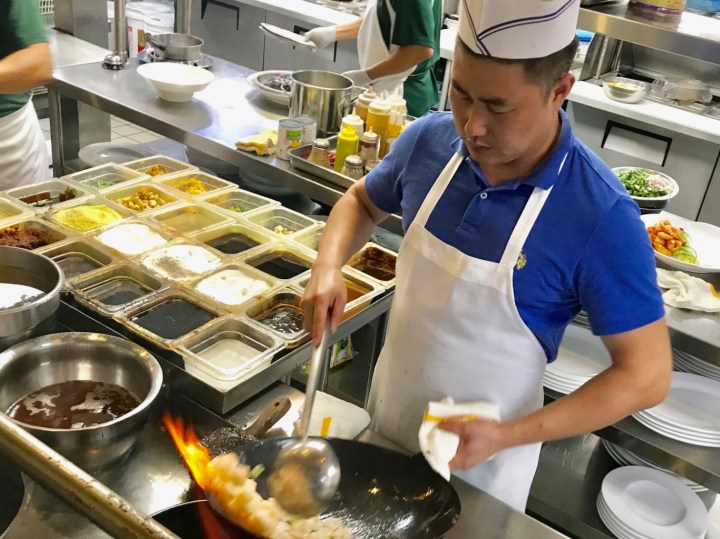 COPY
Chef Chun Lei cooks shrimp on a gas stove in the kitchen of Shanghailander Palace in Arcadia. Josie Huang

In the kitchen of Shanghailander Palace in Arcadia, California, restaurant owner Charles Lu watched one of his cooks toss raw shrimp into a giant wok, setting off a thunderclap of sizzle. Blue flames shot up around the wok.

Cooking with gas is dramatic, sweaty and part of the rhythm in the kitchens of San Gabriel Valley’s Chinese restaurants. But as California looks to reduce its carbon footprint, Lu fears gas is under threat.

For California to meet its goal of going carbon-neutral by 2045, a growing number of city and state officials want to phase out fossil fuels, like natural gas, in favor of what they see as a cleaner alternative: renewable electricity. That has the gas industry fighting for its future, and it’s found some passionate allies in restaurant owners like Lu.

“If you tell me [there] will be no more gas, please, you can take my business,” Lu said. “I want to sell. I don’t want to continue anymore.”

While no-one’s telling him to ditch his gas stove right now, Lu said he doesn’t want things to get to that point. He’s watched in recent months as cities like San Jose and Berkeley have banned gas hookups in new construction. Meanwhile, the state is developing incentives for home builders to install electric appliances over gas.

Many chefs feel strongly about cooking with gas. But the issue has gotten special attention in the Asian-majority cities in L.A.’s San Gabriel Valley, where Chinese restaurants are critical to local economies and culture, and gas cooking is seen as necessary to create the taste and texture of Chinese cuisine.

“A lot of people from all over come to San Gabriel for great Chinese food,” said Chin Ho Liao, a council member in the city of San Gabriel.

Local restaurant owners have complained to Liao that business is already suffering because of the U.S.-China trade war.

Restaurants that run on razor-thin profit margins can’t afford to lose their gas stoves, Liao added. To show their support for natural gas, Liao and his fellow council members passed a resolution drafted by Southern California Gas Company calling for “balanced energy solutions.” Dozens of other cities have also adopted near-identical resolutions at the urging of the utility and the non-profit it helped fund, Californians for Balanced Energy Solutions, led by Jon Switalski.

The nonprofit has held press events with local Chinese restaurant owners and chefs, as well as trying to build support for gas in the Latino food industry. It’s also argued that electrifying buildings will be too expensive for low-income communities.

“I feel like they’re trying to drive a wedge along lines of race and class,” said Rachel Golden, policy expert and senior campaigner with the Sierra Club.

The gas industry is staying silent about health risks posed by gas stoves, she added. Studies have shown they can release chemicals like nitrogen dioxide and formaldehyde.

“This leads to levels of indoor air pollution that would be illegal if measured outside,” Golden said.

“Maybe create a natural liquid smoke which you can do, right?,” Tsai said. “You can char stuff and infuse oil with it, or you can infuse your soy sauce with it and you can get that type of flavor, like a wok-charred dish.”

Even so, he prefers to cook with woks over gas because he said it gives dishes their unique flavor.

Lu said his customers at Shanghailander Palace would miss it if he were to switch from gas. He said he’ll do what it takes to keep his gas stoves, even if it means working closely with the gas industry.