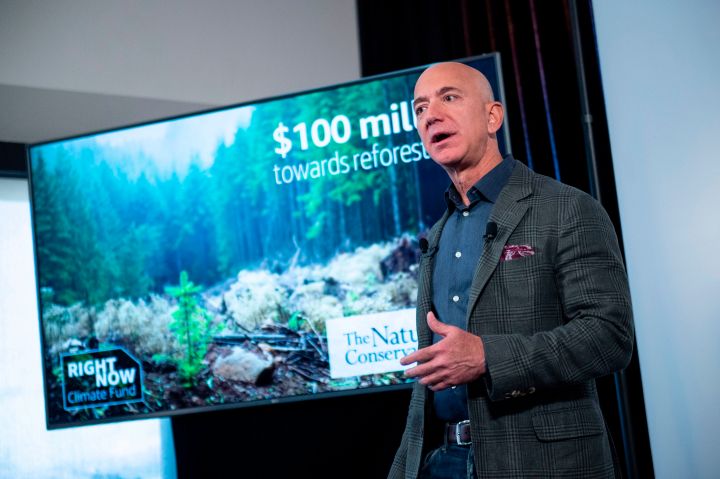 Amazon Founder and CEO Jeff Bezos speaks to the media on the companys sustainability efforts on September 19, 2019 in Washington, D.C. Eric Baradat/AFP/Getty Images

Amazon Founder and CEO Jeff Bezos speaks to the media on the companys sustainability efforts on September 19, 2019 in Washington, D.C. Eric Baradat/AFP/Getty Images

From Amazon’s Climate Pledge to a group of 130 global banks adopting UN-backed “principles of responsible banking,” climate change seems to be the leading fashion statement for business in 2019.

In the last month alone, Google declared itself “the largest corporate buyer of renewable energy in the world;” Nestlé said it would achieve zero net greenhouse gas emissions by 2050.

The June 2017 announcement of the United States’ intention to withdraw from the Paris Agreement was a major catalyst for climate action, said Dr. Nate Hultman, director of the Center for Global Sustainability and report lead at America’s Pledge, a coalition working to measure the efforts of non-national actors who have committed to meeting the emissions targets of the Paris Agreement.

“They look around, they realize that they do have some power to do something within their jurisdiction or within their company,” Hultman said. “Several factors over the last couple of years have driven a refreshed view of what meaningful and ambitious climate action can be.”

Meanwhile, climate strikes have expanded from cities and schools to businesses; scores of companies participated in the September 20 strike.

“For many years, I think we assumed that the federal government or international bodies would really be taking the lead on climate change. And sadly, that’s really not lived up to our expectations,” said Dr. Jonathan Foley, executive director at Project Drawdown, a climate change solutions research organization.

“So what’s interesting is you’re seeing the focus of leadership shift mainly to states and cities on one end, and corporations on the other.”

“At this point there are 62 companies with American operations that have committed to 100% clean energy, with a market cap of almost a trillion.”

On the same day as the U.S. withdrawal announcement, the “We Are Still In” pledge launched with the signatures of more than 1,200 governors, mayors, businesses, investors and educational institutions from across the U.S. or with significant operations in the U.S. (signatories have more than tripled the group’s launch).

With commitment thresholds that are decades off receiving plenty of media coverage, critics say these undertakings amount to little more than good PR. Groups like the NDRC have interrogated climate commitments that they say seem progressive on paper, but only comprise a fraction of a company’s environmental impact.

“A proclamation of intent from a CEO or from a board is quite different from a company making a commitment and actually going to 100% clean energy,” Hultman said. “But if you actually start to tally up the kinds of commitments that are being made, the level of ambition for these commitments is getting very, very high,” he said.

According to Hultman, 62 companies with American operations have committed to 100% clean energy. “That’s 100%, clean, that’s not just saying: ‘OK, we’re going to buy some wind on the margin.’ They’re saying ‘All of our operations are going to go fully clean energy,'” he said. “And that’s a very big change in the level of ambition from before.”

That difference means a strong incentive for the production of renewable energy. Hultman said businesses measured by America’s Pledge independently brought more than 1,700 megawatts of utility-scale renewables online in 2018. Depending on a variety of factors, that’s the equivalent of powering somewhere between 278,800 and 1.5 million homes.

“Areas like manufacturing, buildings, transportation, agriculture — those still need serious solutions, and they need policy to help implement them.”

Energy usage in the U.S., however, regularly hovers just shy of 4 trillion kilowatt hours per year (or 4 billion megawatt hours).

But groups measured by America’s Pledge now represent about 70% of U.S. GDP and nearly 65% of the country’s population, said Hultman. “It’s unequivocal, that this group of actors is big, it has a big footprint.

“Do they have enough policy levers, enough capital deployment, to actually meaningfully push the overall emissions trajectory of any given country in a positive way, for climate? We find, yes, that it does actually make a difference.”

Foundations for real change are happening, Foley agreed. “The technologies for some climate solutions, especially in electricity, are getting mature and inexpensive. Markets are very good at solving problems like that, so that’s heartening,” he said.

“Other areas like manufacturing, buildings, transportation, agriculture — those still need serious solutions, and they need policy to help implement them.”

“When it comes to federal lobbying, they’re certainly lobbying the federal government on other issues they care about, whether it’s H1B visas, IP protection, international trade disputes, and so on,” he said. “But are they going to lobby Washington for climate change action? So far, I haven’t seen it.

“We have to do what we can,” Foley said. “If it’s a bit more of a patchwork, so be it. Eventually you make a quilt anyway.”