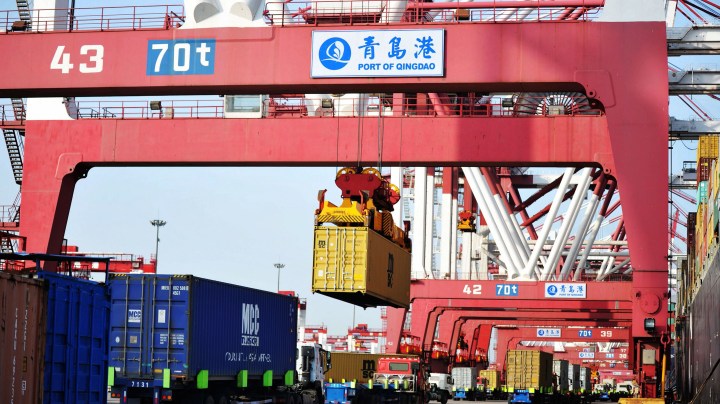 COPY
China's exports fell by over 3% in the past year, slowing GDP growth. Above, the port in Qingdao in China's eastern Shandong province in 2018. AFP/Getty Images

China's exports fell by over 3% in the past year, slowing GDP growth. Above, the port in Qingdao in China's eastern Shandong province in 2018. AFP/Getty Images
Listen Now

The Chinese central government will release gross domestic product (GDP) data on Friday and economists expect growth to be right around 6%, maybe even lower. That would be the slowest growth in China in almost 30 years.

Chinese exports fell by 3.2% year-on-year in September, underscoring the impact of the trade war with the United States and slowing global demand generally.

Chinese households are already feeling the current economic stagnation and the government has to be ready if things get even worse.

“A significant slowdown, beyond what they’re already facing, would be a truly unique challenge for China’s political leaders,” said Andrew Coflan, a policy analyst in the China practice at the Eurasia Group.

The Chinese government has tried to spur growth in the economy by cutting taxes and introducing stimulus packages for the manufacturing sector, which hasn’t worked.

The Chinese government might have to use monetary policy to grow the economy. But as Victor Shih, an associate professor of political economy at the University of California San Diego warned, that comes with its own set of consequences.

“If the Chinese government were to print more money, that could exacerbate inflation. Which is also not desirable for the government,” he said.