Negotiating your salary is one of the most stressful parts of changing jobs. Asking for a raise at your current job can be even harder.

We’ve been talking about it on our podcast “This Is Uncomfortable,” and featured a rare success story last week. To help all of us find the same success, we called up law professor Carrie Menkel-Meadow. She’s spent her life teaching people how to negotiate and is a founder of the field of dispute resolution.

She boiled successful salary negotiation down to these five rules:

There’s a lot you can do to prepare for this conversation, Menkel-Meadow said, but what’s most important is finding out how much people with your experience and title make.

“You could actually call people up in the workplace that you’re negotiating with,” she said. “Ask them, ‘So what are you making?'”

Basically, do what Caitlin Boston did on the last episode of “This Is Uncomfortable.” You can reach out to former employees or, depending on the employer, you can even check tax documents and other disclosures.

Menkel-Meadow also advises writing a script for yourself with all the points you want to make and prepare for different outcomes.

You should even prepare your response if you get offered exactly what you’re looking for. Should you accept it or ask for more?

Whether you’re on the phone or in the office, wear something you feel comfortable in, Menkel-Meadow said.

“If you are uncomfortable in your soul, in what you’re wearing, you won’t be a good negotiator,” she said.

Everything is negotiable, Menkel-Meadow said, not just money.

Going into a negotiation, it’s important to really think about what you want to get out of the job. There’s probably a salary you have in mind, but what about vacation? Or parental leave? Whatever it is, would you be willing to give up a little salary for it? How much?

“Before you start talking to the employer, ask yourself questions. What do I really want?” said Menkel-Meadow, who once negotiated for an office with a window. “It’s very easy when you’re negotiating about salary to think it’s only about money. And for some people, it might be, but it hasn’t been for me.”

The other thing to ask is how the company arrived at that salary. You have a right to know, Menkel-Meadow said, so ask how the budget is made or the opportunities available for advancement, anything. And don’t worry about coming off too aggressive, just be matter-of-fact.

Rule #4: Know your worth

If you have to make a counteroffer, be ready to explain why you deserve that amount. You can talk about your own skills, you could talk about external factors like the commute or rising rent, or you can talk about what you’ve heard other people in your field make.

“To the extent that you can key what you’re requesting to data, and to information, and to principles, it makes it much harder for somebody to say no,” Menkel-Meadow said. “Use the word fair. I just want what’s fair. It’s not tacky, it’s fair.”

Negotiating your salary can be really stressful!

It might feel tempting to rush through the process but don’t.

For more from Menkel-Meadow, including some play-acting negotiation scenarios, listen to “This Is Uncomfortable.” 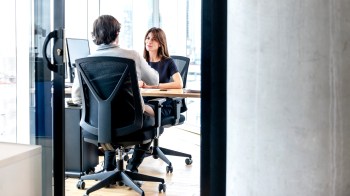