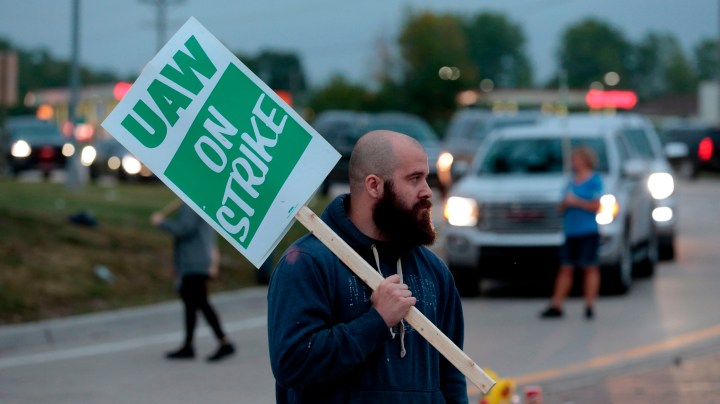 COPY
Members of the United Automobile Workers who are employed at the General Motors Co. Flint Assembly plant in Flint, Michigan, slow down salaried employees entering the plant as they strike early on Sept. 16. Jeff Kowalsky/AFP/Getty Images

Members of the United Automobile Workers who are employed at the General Motors Co. Flint Assembly plant in Flint, Michigan, slow down salaried employees entering the plant as they strike early on Sept. 16. Jeff Kowalsky/AFP/Getty Images
Listen Now

It’s been a busy few days at the United Automobile Workers union hall that serves workers at General Motors’ Wentzville, Missouri, plant. Union officials have been getting 4,500 workers signed up for strike benefits: $250 per week in strike pay and health care paid for by the union, as GM has decided not to cover striking workers. Other workers are trying to stay on top of the news and keep from spending the money they’ve saved in anticipation of the strike.

On the picket lines, the issue at the front of many striking workers’ minds is bringing pay and benefits for the automaker’s temporary workers into line with those of permanent employees.

Marketplace senior reporter Tracey Samuelson spoke with a number of striking workers at the Wentzville plant to hear their take on the walk out.

Haynes used to be a mortgage auditor, spending her days at a desk with two monitors and four weeks of paid vacation a year. Now, she works on brakes and engines in the chassis department.

“I came from a white collar to a blue collar,” she says. “I love just being here and it’s because of my husband.”

The job change allows her to spend more time with her husband of 23 years, who is a permanent employee in the same plant. She gets GM benefits through him, but because she’s a temp, she can’t take time off or receive the profit sharing bonuses paid to permanent employees.

“I’ve worked on a line where it was only one permanent person and the rest was temps,” she said. Without temps, “this product wouldn’t be made. If you’re working eight to 12 hours a day building a product and when it comes time for profit-sharing, you don’t get anything, that’s like a slap in the face.”

“I’m 100% for [the strike],” Grobosky said from the picket line. “Because we shouldn’t have temps that’ve been here for four or five years not being able to move up. Your hands are falling off, your feet are falling off. You’re tired. And you get one day off every three weeks. You can’t do that without vacation.”

Grobosky moved from Lordstown, Ohio, in April, after GM idled its plant there. His family stayed behind, which means he’s now paying the mortgage on their house in Ohio, plus $650 a month for a shared rental apartment in Missouri.

“I split it with some guy that I didn’t even know just to save money,” he said.

During the strike, he’s cutting back on expenses where he can. “Not going and buying stuff that you don’t need, not spend anything, because I have two households around now, one there and one here,” he said. “I try not to let anybody worry at home and tell them everything’s all right. I’ve been on strike three times before, and I know this is a serious strike, but it won’t last forever.”

When Tony Guiffrida isn’t on the picket line, he’s spending the strike working out, hanging out with family, and trying to relax.

He said his top priorities in these talks are “the temps being hired. And probably having more time off, because we work all the time.”

Employees often have to work two Saturdays in a row, then get one Saturday off, before working two more six-day weeks.

Guiffrida spent 90 days as a temp worker before being hired on permanently. He says that soon after he was hired, it seemed to get much more difficult to become a permanent employee. He knows temporary employees who’ve worked at the plant almost as long as he has and, “they don’t have any benefits and their pay is way lower. No days off and no vacation.”

He said it doesn’t feel right to do the same job as someone else, but be treated so differently.

Justin Mokriakow, hired as a temp in May 2015, hired permanently in October 2016

Justin Mokriakow normally works in GM’s trim department, putting carpets in vans and gear shifts in trucks. During the strike, he’s been logging 13-hour shifts at the UAW local’s union hall, registering other striking workers for benefits through the union and relying on cans of Mountain Dew to keep him going.

He wants to ensure his health insurance premiums don’t increase under the new contract. GM has said its latest offer to the union prior to the strike maintained existing health benefits.

“That’s a big one for me,” he said. “I had cancer and my insurance paid over $2 million into my cancer care.”

Because he has ongoing health issues and frequently goes out on sick leave, Mokriakow said he wasn’t able to save money in preparation for the strike, the way many of his co-workers have.

“I have children, so this is going to be hard,” he said.

But, he added, it is worth the sacrifice.

“It’s important to me that we all get treated fairly — everybody from the newest person that started right before the strike to the people that are retired,” he said.

“We don’t want GM to keep the divide between us.”