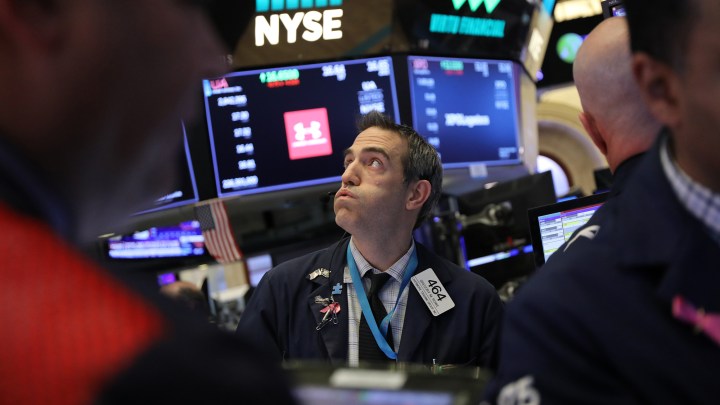 The U.S. economy doesn’t exist in a vacuum, and one of indicators of a possible recession is the lack of optimism among people in other economies around the world. This has led to a significant portion of the tradeable bonds in the world — nearly a third — to have negative yields. Earlier this week, Germany auctioned off just over 820 million euro’s worth of its 30-year debt — $909 million — at a negative yield. Which leads to the question: What is going on in the global economy?

One-third of global “tradeable bonds” are currently in the negative in countries including Denmark, Germany and France. And although they haven’t reached the red in the U.S., the 30-year Treasury bond hit a record low last week.

To make some sense of the negative bond yields and find out what it means for the U.S., “Marketplace” host Kai Ryssdal talked to Pao-Lin Tien, assistant professor of economics at George Washington University. The following is an edited transcript of their conversation.

Pao-Lin Tien: Well, negative interest rates essentially means that if you are looking at it from the saver’s perspective, this means that you have to pay the bank to keep your money on deposit.

Ryssdal: OK, so if I’m buying, say, German government bonds, as I talked about in the introduction, and they’re offering a negative rate, it’s costing me money to buy those bonds?

Tien: That is correct. It means, essentially, a German government is not going to pay you anything to actually let them borrow money from you.

Ryssdal: Why is this happening now?

Tien: Well, I think the sentiment right now is that the world economy, especially a lot of large economies, like European economies, are not looking so bright in the near future. People are fairly pessimistic, and they don’t want to spend, they don’t want to invest. So policymakers are trying their best to try to stimulate demand and stimulate consumption, as well as investment by offering these negative interest rates in various major central banks.

Ryssdal: Am I the only one to whom this smacks of desperation? Because it does not seem sustainable.

Tien: This is sort of a desperate measure by policymakers. It seems they can’t think of anything else to do, so give this a try. And I think that for certain economies, this might work, if consumers in that particular economy respond to these kind of incentives, because it’s costly for them to keep their money on deposit at a bank, having to pay the bank money, they might as well spend it. Hopefully, these sort of actions would stimulate the economy, stimulate demand, and dig us all out of this big hole.

Ryssdal: Right. Better to spend, then actually have it cost you money to borrow. I get that. What, though, happens if people take their money and instead of spending it, because you know, times are conceivably getting rough if they’re offering negative interest rates, what if I just stick it under my mattress, so to speak?

Tien: Sometimes it might make sense if the bank is charging you to keep money at the bank, you might as well keep it under your mattress. And that’s sort of the worst-case scenario. Because if you don’t spend it, nothing’s going to happen to economic demand. And this means that we might go into what we call a deflationary spiral: prices might actually decline because people just aren’t spending. They aren’t demanding products or services and keeping the money under their mattress.

Ryssdal: So if I’m Jay Powell, making this big speech, tomorrow at Jackson Hole, and I’ve got the president in one ear saying lower rates, and I’ve got the Europeans doing this other thing with negative yields, and I’m frankly caught in the crossfire, what am I thinking?

Tien: That is a tricky question, of course, so I’m glad I’m not Jay Powell. But thinking in terms of the Fed, right now, lowering the interest rates during their last meeting, is that they had the revision on what they believe the natural rate of interest to be given the global environment right now. But my other concern would be when all these other countries are lowering their rates into negative territory, that might lead to an increase in the value of the U.S. dollar.

Ryssdal: Which is absolutely not what the president wants, right?