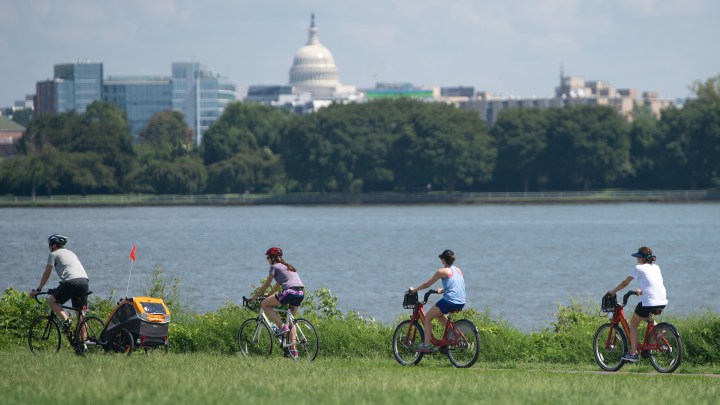 COPY
People ride bicycles alongside the Potomac River in Arlington, Virginia, with the US Capitol in the distance, September 3, 2018, during the Labor Day holiday, the traditional end of the summer vacation season. SAUL LOEB/AFP/Getty Images

People ride bicycles alongside the Potomac River in Arlington, Virginia, with the US Capitol in the distance, September 3, 2018, during the Labor Day holiday, the traditional end of the summer vacation season. SAUL LOEB/AFP/Getty Images
Listen Now

Congress is getting ready to start its summer recess and won’t be back in session until the week after Labor Day. Sure, there will be some town hall meetings with constituents. But fundraising is also high on the agenda.

That’s partly because these days, control of Congress flips back and forth between the parties. Plus, members of Congress are more likely to be challenged in a primary. There aren’t as many safe seats as there used to be, which means incumbents need to raise money constantly.

But, according to DuHaime, at least summer fundraisers can be fun — he’s been to barbecues and beach parties. There was one event he used to go to every summer on the Jersey Shore.

“I’d put $50 or $100 down to go, probably eat as much as I wanted and hang out with a lot of people all day, and that’s the kind of fun that I think you can do in the summertime.”

The fundraising is less intense this summer without an election around the corner. Still, candidates have to raise a big chunk of change.

“If you’re running for a House seat you essentially need to raise at least $1 million to win,” said Stetson University law professor Ciara Torres- Spelliscy, who added that the Senate races can cost multiple millions.