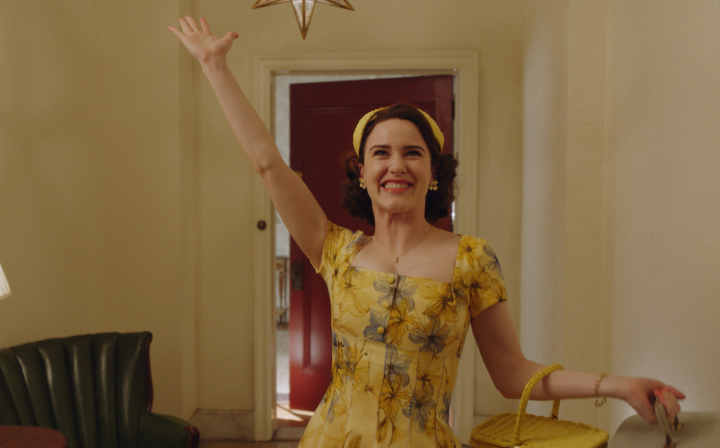 A view of Miriam "Midge" Maisel, played by Rachel Brosnahan, in the Amazon Prime show "The Marvelous Mrs. Maisel."

A view of Miriam "Midge" Maisel, played by Rachel Brosnahan, in the Amazon Prime show "The Marvelous Mrs. Maisel."

This post contains spoilers for season one and two of the TV show “The Marvelous Mrs. Maisel.”

At the end of the first episode, holding a bottle of kosher wine and wearing a nightgown, the star of “The Marvelous Mrs. Maisel” gets on a stage and delivers a searing impromptu monologue about her cheating husband and why her life is in shambles. All while cracking jokes.

It’s the moment when audience members (both the ones at the Gaslight Café, where she performs, and us viewers at home) get to witness Miriam “Midge” Maisel’s first unofficial act as a stand-up comic.

Amy Sherman-Palladino and Daniel Palladino (the showrunners behind “Gilmore Girls”) created the Amazon Prime TV series, which follows Midge — an upper-class Jewish housewife played by Rachel Brosnahan — as she tries to pursue a career in the male-dominated world of comedy.

The series features the Palladinos’ signature witty, rapid-fire dialogue, but the nonverbal elements — specifically, the costumes — are just as important.

“The clothes always have to reflect Midge’s mindset,” Zakowska said. “Her life has a theatricality, in her own mind.”

Zakowska and her team make most of the clothing for each of the show’s principal’s characters, with hundreds of costumes designed each season.

“I always sort of say being a costume designer is like being a warrior. Costume design is always a bit of a battle. Making a film is a battle,” she said. “And so you have to be a bit like an athlete, I think, psychologically and physically, to actually do a project like this, because it’s so big and it’s so extensive and you’re in different locations and you have insane deadlines.”

Zakowska joined us to discuss some of her favorite Midge outfits and what they say about the character’s mindset.

A trip to Paris

In this scene from the first episode of season two, Midge has been wandering around Paris and ends up calling her husband, Joel, to tell him she wants to work on their relationship.

“The colors have a very French, practically Marie Antoinette-esque spirit,” Zakowska said. “The whole feeling of it was like pastels and floating watercolor tones — it had that sort of that French painting, romantic vibe. That’s sort of where we began season two with her.”

She added that the outfit was important to her because she “knew it was going to be placed in some of the most beautiful, romantic environments in the world, and so it had to stand out in those environments.”

In the show’s very first episode, Midge wears a pink coat when she’s still in a seemingly happy relationship with her husband. Zakowska said the pink colors in this outfit harken back to her past. However, this time around, she’s also in different pastel colors.

“I think it was very much about her wanting to be a part of that world, but also feeling like she was still very much a part of the other world — her past romantic life — and so there’s sort of an emotional longing, to me, in the outfit,” Zakowska said.

The importance of red

In the second episode of season two, Maisel’s husband Joel tries to buy her an apartment — which she refuses.

“I purposely, again, worked a little bit with her classic pink tone. But then she’s in this very deep, deep, deep sort of burgundy wine-colored tone, with just a layer of pink over it,” Zakowska said. “There’s something about these red tones … it’s the color of blood; it’s the color of passion; it’s the color of strength. I wanted her to be very strong in that scene. But yet, there’s always that sort of softness that is a part of who she is.”

A visit to the past

In the middle of season two, Midge and her family head off to the Catskills, a mountain range in southeastern New York and once a major vacation destination for American Jewish families.

Zakowska said this visit represents “a little bit of a rebirth of the inner child in her.”

“She is returning … to the sunny womb, in a way. And the Catskills [represent] the place where she and her family always went,” Zakowska noted. “So I wanted to make that costume as sunny and as bright as you possibly could.”

Zakowska said one of Midge’s favorite outfits is her nightgown and pink coat during her first stint as a stand-up comic.

“Amy [Sherman-Palladino] really framed it as her having a sort of breakdown that night. It was the night before Yom Kippur, which has sort of been a really joyous family moment,” Zakowska said. “But it’s also a moment where she discovers what her possibilities as a performer, so it’s rather important.”

For Zakowska, coats in general have become an important of Midge’s wardrobe.

“The coat or the jacket is what sort of determines the character, because it’s what moves when you move,” Zakowska said. “And so the coats have become a big concentration for us.”

At the end of show’s first episode, Midge bails out the famous comic Lenny Bruce and asks whether he loves what he does.

“She’s finally, for the first time, thinking to herself: Is this possible? Can I do this? Can I break away from my life?” Zakowska said. “That green is, for me, a heroic color.”

Zakowska, who studied painting at the Ecole des Beaux-Arts in Paris, said the color choices on the show are very intentional.

Check out our interview with Amy Sherman-Palladino and Dan Palladino here.