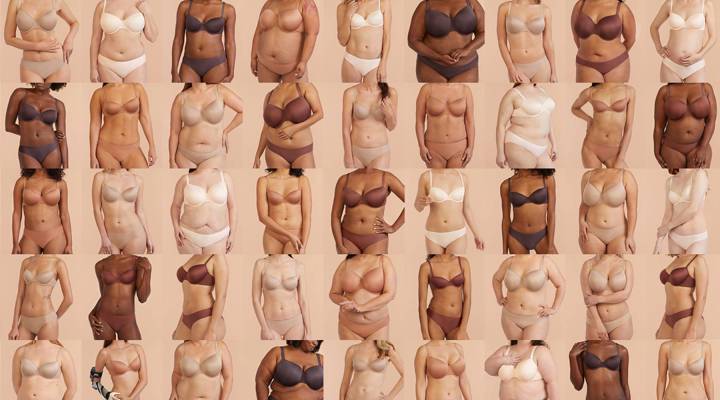 COPY
Online startups entering the $7.2 billion bra business are responding to a demand for bras in more sizes and shades. Above, an ad for ThirdLove. Courtesy of ThirdLove

Online startups entering the $7.2 billion bra business are responding to a demand for bras in more sizes and shades. Above, an ad for ThirdLove. Courtesy of ThirdLove
Listen Now

On a spring night, Sara Buchholz, 26, is out for a walk in the South Side Flats neighborhood of Pittsburgh with her boyfriend. They stop at an Aerie store where she looks at bras.

“I don’t actively shop for a bra anywhere else. I think it’s mostly because this is just the most accessible, I would say,” she said.

Buchholz, who wears a 34A, said she likes Aerie’s basic cotton bras because they’re comfortable and under $30. And she also likes Aerie’s ads, which feature untouched photos of models of all shapes and colors with freckles, tattoos and stretch marks.

“You do see people wearing it who are more relatable body type,” said Buchholz. “It’s kind of hard to tell with Victoria’s Secret because it’s geared towards one very specific body type … so it doesn’t give me much of an idea of how it would look on me.”

Aerie only has a few hundred stores but is planning to open 60 to 75 more this year. Victoria’s Secret has more than a thousand stores but recently announced it’s closing more than 50.

Barbara Kahn, marketing professor at Wharton, said the rise in athleisure meant a spike in sports bra sales. And that’s led to women wanting more comfortable bras all the time.

“Once a consumer moves to something that’s more comfortable, it’s very hard to get them back into a less comfortable clothing,” she said.

Kahn said shoppers also want more sizes and shades, which online startups that have entered the $7.2 billion bra business offer, like True and Co., Cuup and Adore Me. So does ThirdLove, a-6-year-old company that sells bras in 78 sizes — twice as many as most brands — and some of those are half sizes. Forbes estimates the company is worth $750 million.

To learn more about the company, I pulled up its site with my friend Sue Shannon, a ThirdLove devotee. For the past two years, she’s pretty much only worn this brand.

“I’m a little obsessed. It’s the first bra that I’ve ever had that actually fits and holds me,” she said.

She’s 40 years old and a ThirdLove 34D. Lately though, she thinks her size may have changed.

She works her way through the brand’s fit finder to get resized for a new $72 bra. She answers questions about her height, what latch she closes her bra on and figuring out which one of nine breast shapes she has.

The data collected from my friend and 13 million other women who have filled out questionnaires on ThirdLove’s site go into an algorithm that calculates the best bra size and shape for each customer, according to ThirdLove co-CEO Heidi Zak. Zak used to work at Google and says her brand’s fit finder isn’t that different than visiting a store and having a saleswoman measure a customer to figure out the right bra for them.

“In some ways what we’ve done is take a really old-school, not-scalable method of finding bra size and really brought it into the digital age,” she said.

The next step is customizing bras to give everyone a better fit. That’s different than the way bras have traditionally been made, using a 34B as a standard, then sizing up or down. ThirdLove said with so much data, it can handle any kind of fit issues a woman may have from a digging underwire to a slipping strap.

It took a while to have a bra industry disruptor because making bras costs a lot, said Cora Harrington, author of “In Intimate Detail.” The most basic of bras has two dozen components.

“We’re talking, you know, straps, closures, adjusters, wires, padding, bands, just all these pieces, and someone has to sit down and take all those little, itty, bitty pieces and sew them together at a machine to have precision that’s measured in millimeters,” she explained.

Millennials are the majority of those startups’ customers, but the most growth in the past year has come from baby boomers, who have money to spend on those $72 bras. And big players like Hanes and Wacoal have taken note. They’ve increased their advertising to compete with the startups that have already swallowed 24 percent of the market share.

Those traditional brands know that when a company has latched on to a customer, it wants to keep them close.